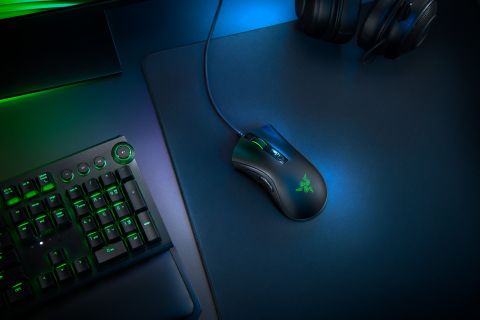 A new sensor, scroll wheel, and wire arguably makes this the best wired mouse available today. But it’s a lot pricier than others that are nearly as good.

The Razer Deathadder V2 improves on everything we love about the Deathadder Elite, one of our favourite gaming mice that has been around since 2016. But is the Deathadder V2, with its improved optical sensor, more durable left and right mouse buttons, and a smoother scroll wheel one of the best mice money can buy? Yes.

But the question isn’t whether the V2 is the best version of the Deathadder (it is), the question is: is it worth buying, given that it's currently $35/£35 more than the Elite? Maybe.

The most obvious improvement is the Focus+ Optical Sensor, the same one used in the excellent Razer Viper Ultimate Wireless. I’ll go into it in a second, but I was more impressed by the more subtle changes Razer has made for the V2. The first is the scroll wheel. Razer has a ridiculous name for the new design, "Instinctive Scroll Wheel Tactility," but the results are perfect. It’s exactly the right tightness. It spins smoothly, but you can still feel every notch of the turn, so you won’t accidentally scroll too many times.

The fact Razer is using a new wire (with an equally ridiculous name, "Speedflex Cable," also sounds insignificant, but turns out to be a big deal. I’ve used a version of the Deathadder (the Expert) for years, and my one complaint is that the stiffer wire can sometimes pull the mouse to one side, depending on how it sits on my desk. The V2’s wire is the most flexible I’ve tried on a gaming mouse, and ultimately that means it’s less likely to impact your mouse movement, even if you get lazy about wire management, like me.

The left and right mouse buttons are more durable than the Elite, too. They’re optical, rather than mechanical (they use an infrared light beam to register clicks), which means they should deliver fewer misclicks, lower latency, and have a longer life. Razer reckons they’ll last 70 million clicks, rather than the 50 million for the Deathadder Elite. While I can’t possibly tell how accurate that number is, they certainly felt as responsive as I could ever need, and I never misclicked. In games of Fortnite and Escape from Tarkov my shots felt instant, and I never had to worry about firing accidentally.

The up and down sensitivity buttons have been redesigned, too. The Elite’s were essentially one long, thin button split in two. The V2’s are wider and separated by a sliver of plastic. It doesn’t look as flashy, but the gap makes it easier to distinguish between the two without looking, ideal if you need to change sensitivity in the heat of battle (if you’re zooming in with a sniper, say).

There's also a new button on the mouse’s base that switches between custom profiles for sensitivity and RGB lighting. If you’re signed into Razer’s Synapse software, you can set up an unlimited number of profiles, and you can also store five in the on-board memory to use regardless of where you plug in the V2. Once you’ve set up the profiles, it’s an easy way to flip between options without digging into Synapse.

Next, the material. The Deathadder Elite has segmented thumb rests on either side of the mouse, with edges that clearly separate them from the rest of the side panel. On the V2, there’s less separation, and with raised, pimpled portions on the panel instead. They’re still grippy, but it looks much slicker. Without seams to separate them, dirt buildup is less of a concern, too. The matte black coating on the top of the mouse stops your hand from slipping, and when combined with the V2’s shape (like the Elite, it’s pretty much the ideal shape for a right-hander, and fits well in almost any palm size) it makes the V2 a comfortable mouse to use for hours and hours.

And then we come to the sensor, Razer’s 'party trick' (the Deathadder Elite’s stats are in parentheses for comparison). It goes up to 20,000 DPI/CPI (16,000), tracks up to 650 inches per second (450), and has a resolution accuracy of 99.6 percent (99.4 percent). Those increased numbers may or may not mean much to you, because they’ll make very little difference in day-to-day performance. How often do you need to go above 16,000 DPI/CPI? Not often.

What I will say is that the V2’s sensor performed flawlessly. It felt accurate, snappy, and smooth, even when I used it on my desk without a mouse mat. The new PTFE mouse feet (which is the same material used to coat non-stick pans) glided over any surface I tried them on, including a leather sofa. By comparison, the Elite’s feet are non-PTFE, and don't have as smooth of a feel.

However, carrying on a trend in recent Razer mice, the left and right mouse buttons are a bit flimsy. They feel fine, even sturdy, when you’re clicking them straight on, but the slightest amount of sideways pressure makes them waggle off-centre. It makes me think they couldn’t take much of a beating, such as if you threw the V2 into a bag before running out the door. It’s a relatively minor gripe, but I noticed the same thing with the Viper Ultimate Wireless, and I hope Razer can sort it soon. It detracts from the overall solid build.

The big sticking point is price. The $70/£70 price tag is technically the same recommended price as the Deathadder Elite. But you can buy the Elite a lot cheaper. On Amazon, it’s currently going for half that price, for example. Is the V2 a better mouse? Absolutely. Is it twice as good? Absolutely not.

Whether or not you should buy it therefore depends on how good a deal you can get on the Elite, and how much you value the incremental improvements the V2 offers. If you want the absolute best version of Razer’s most reliable wired mouse, this is it. But if you want to save a bit of cash, then you still can’t go wrong with the older model.

A new sensor, scroll wheel, and wire arguably makes this the best wired mouse available today. But it’s a lot pricier than others that are nearly as good.