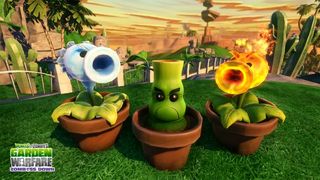 So far we've only been able to watch Plants vs. Zombies: Garden Warfare from afar. PopCap's biggest, shootiest game yet was released on Xbox One and Xbox 360 earlier this year, and people who've played it on those platform seem to enjoy it quite a bit. Today, we finally got a PC release date to look forward to.

Garden Warfare will release on Origin and other retailers for PC starting June 24. PopCap first described it as a combination of tower defense and third-person shooters, but since then the game has turned out to be mostly like the latter. Teams of up to 12 players can choose from a variety of modes, some of which are directly inspired by Battlefield , and kill each other over and over again—only in this game the battles are all kinds of cute and silly. That alone is an interesting twist, and PopCap also gives the weird characters abilities you don't see in other shooters, like the Chomper Plant that can burrow toward the enemy.

Last week, Electronic Arts also announced that it was adding in-game purchases to Garden Warfare. Basically, you'll be able to buy the in-game currency for real money, which will make it easier and faster to unlock a lot of customization options.

If you're not a big fan of that idea, at least take comfort in the fact that EA promised to release all of the game's DLC content for free.