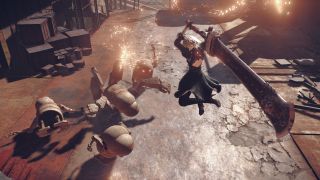 Nier: Automata: Game of the YoRHa Edition is coming to PC and PS4, according to a rating on the ESRB website. This likely isn’t the kind of update PC players were hoping for.

Despite being one of Platinum’s best games—and our best action game of 2017 —the PC port is, frankly, a bit of a shambles, calling to mind the days when multi-platform publishers expected people simply to be happy a game was coming to the platform at all. It hasn’t received a single patch on PC, aside from an update for DLC that didn’t fix anything.

Andy remarked on the shoddy quality of the port back in his Nier: Automata review, and nothing has changed. Well, not nothing—modders like Kaldaien did what Square Enix has failed to do so far, developing a mod that tackles loads of the game’s issues.

Last year, in June and July, Nvidia and AMD released some drivers that were meant to be fix one problem, but that’s been the extent of the PC support. At the same time, Square Enix said it was working to address more issues with the Steam version of the game. It did not.

Will this upcoming GOTY version fix anything? My money is on it just bundling the DLC, but if it also includes improvements to the port quality, that will prove controversial. Hopefully we’ll find out more about what it contains soon.