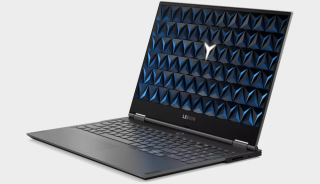 Thunderbolt 3 allows PCs to use graphics cards and other PCIe devices over a single cable, but it's not a very practical solution at the moment. Not only does Thunderbolt bottleneck the GPU's performance, but PCIe enclosures (like the Razer Core V2) typically cost hundreds of dollars on their own. But that's not stopping Lenovo from trying, because the company just announced a thin and light 'gaming' laptop designed to be used with an external GPU.

Lenovo is showing off the Legion Y740S at CES 2020, the company's "thinnest and lightest gaming laptop yet." However, it only offers Intel HD graphics, so I'm not quite sure it qualifies as a gaming laptop. In order to play more than just Minecraft and Fortnite, you're going to need the Lenovo BoostStation GPU enclosure, which costs an additional $249.99. While that's cheaper than most other Thunderbolt enclosures (the Razer Core X is $300, for example), you'll have to put in your own GPU. Lenovo says it plans to sell bundles with graphics cards from Nvidia and AMD later on.

There's also the problem that the Legion Y740S doesn't make for a particularly good gaming machine, even with the added enclosure. While the Core i9 H-series CPU is fine and dandy, the screen is only 60Hz, so you won't get the same smooth gameplay experience you would from a 120Hz or 240Hz gaming laptop. There are plenty of 120Hz gaming laptops with dedicated GPUs for roughly the same price as the Legion on its own (though they won't be as thin), which starts at $1,099.99.

The laptop can have up to 32GB of RAM and 1TB of SSD storage, so at the very least it might be a nice high-performance productivity laptop. Other specifications include two USB 3.1 Gen 2 ports, two Thunderbolt 3 ports, an SD card reader, a headphone jack, and a 1080p or 4K 15.6-inch screen. Both the laptop and enclosure will be available starting in May.