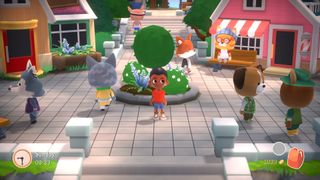 If you've not hopped on the Switch train just yet and are feeling somewhat left out because of Animal Crossing: New Horizons, then don't worry.

Robert Tatnell (who worked as an artist at Sony and Lionhead, working on games like Heavenly Sword and Fable 3) has announced Hokko Life, a PC game heavily inspired by Nintendo's adorable village builder.

At first glance, Hokko Life has a lot of the hallmarks of Animal Crossing: a cute town full of anthropomorphic villagers, interior decorating, fishing and bug-catching. It looks incredibly gentle and friendly, with big-headed friends wafting around your carefully-planned town.

However, Hokko is setting itself apart by focusing on player creativity. Going out into the wilderness, you can collect materials that can be used to open-endedly customise furniture or craft paints that can be used on everything from walls to clothing. Eventually, you may be able to sell your creations to other players in the department store, which is set to be expanded during future updates.

Tatnell is also aiming for fishing and gardening to be more involving than in Animal Crossing, though what that entails hasn't been expanded on. It certainly sounds like Hokko Life is aiming to be more of a mashup between its obvious inspiration and games like Stardew Valley or Harvest Moon, which sounds just lovely.

For a solo project in early development, it is mind-boggling how good the game is looking already. Hokko Life is set to launch into Steam Early Access sometime in 2020.