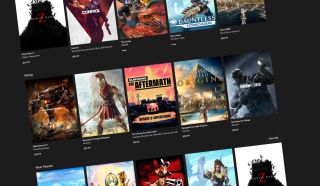 2019 came to an end a couple of weeks ago, but the Epic Games Store's weekly giveaways did not. In fact, it finished the year with a flurry and then started 2020 with a three-fer, before settling back into what appeared to be a familiar one-a-week pattern. Today, Epic finally made it official: Weekly free games are here to stay for 2020.

"New decade means new games and we’re looking at a great start with tons of amazing titles coming exclusively to the Epic Games Store in 2020," Epic said. "To kick things off, we’re extending our weekly free game program throughout 2020. Every single week, come back to claim your game. Once claimed, it’s yours to keep forever."

I think it's interesting that Epic is rolling into 2020 with an emphasis on EGS exclusives. The backlash against store-exclusive releases doesn't seem as vociferous as it was a year ago, but people still like Steam and the low-key feeling that the EGS will dry up and blow away is persistent. This is a pretty clear statement that, backlash or not, Epic doesn't plan on changing course.

Epic also threw out some numbers, viewable below, hinting at why it's not backing down: $680 million spent in the store, including $251 on third-party games—and that's "actual spending by customers," Epic said, and doesn't include "the value of coupons, Epic funding of developers," or that sort of thing. The store may have its detractors, but people are clearly spending money on it.

And even if you've managed to avoid throwing money at it so far, it's hard to say not to free games. Speaking of which, the hand-drawn Metroidvania Sundered: Eldritch Edition is yours for the taking until 11 am ET on January 16, after which the big platformer Horace will take its place for the week. Other upcoming Epic Game Store exclusives include Magic: The Gathering Arena, Predator: Hunting Grounds, Auto Chess, Rogue Company, and Godfall.