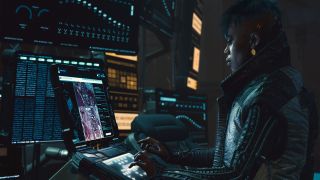 Cyberpunk 2077 is one of the most highly-anticipated games in recent memory, and as with all new open world games, you’re going to need a capable gaming PC if you want to crank every graphical setting to the max. Plus, you wouldn’t want to skip on Keanu Reeves’ texture quality—he deserves the best.

Open world games are typically more taxing on PC hardware than others, and Cyberpunk 2077 will also take full advantage of ray tracing to simulate Night City's neon lighting and reflections—if you have the right graphics card, anyway.

Here we'll go over some part suggestions and general advice for building a Cyberpunk-ready PC. The good news is that with the game now delayed until September, you have some time to formulate your plan.

We have an entire post explaining what ray tracing is and how it works, but long story short, ray tracing involves tracing the path of a ray (a beam of light) within a 3D world. This allows lighting, reflections, shadows, and other effects to look more realistic than they do with traditional rasterization rendering techniques.

To take advantage of those graphical effects, you not only need a graphics card capable of ray tracing, but one powerful enough to do it while delivering a decent framerate at your chosen resolution. We're still waiting on AMD to release a ray tracing GPU, so for now, you're limited to Nvidia's line of RTX graphics cards (and Nvidia is working directly with CD Projekt Red on ray tracing support). That includes the RTX 2060, 2060 Super, 2070, 2070 Super, 2080, 2080 Super, and 2080 Ti. By September, it may even include future Nvidia Ampere RTX 3080 cards (or whatever they end up being called).

The exact hardware requirements for Cyberpunk 2077 haven't been revealed yet, but we can make an educated guess on what kind of hardware you'll need. If you want a PC that can handle Cyberpunk 2077's fancier graphical features, you'll want at least a mid-range PC with an RTX 2060 Super or RTX 2070 graphics card. Technically, even an RTX 2060 would suffice, but it likely won't maintain a steady 60 fps and may need some settings turned down a notch or two.

This is a good build, though if you add around $100 to upgrade to an RTX 2070 Super, and buy a larger 600W power supply to accommodate it, you can be even more secure—those upgrades are especially worth considering if you've got a higher refresh rate 100-144Hz monitor or expect to completely max out the graphics settings.

Buying a pre-built PC from a maker like iBuyPower or Alienware makes things simple: just look for one with an RTX 2060 Super or better, 16GB RAM, and a recent Core i5, i7, or i9 processor. If you’re looking for specific suggestions, check out our roundup of the best gaming PCs.

Building a PC yourself will save money, though you won't get the same service warranty and it's up to you to install fancy cooling and LED lighting if you want it. Our PC building guide explains the basics, and PCPartPicker is a good way to ensure that your components are compatible with each other.

Skip the ray tracing and save money

You can go without an RTX graphics card, and Cyberpunk 2077 will still look pretty. It's difficult to know which corners we can cut here, since exact system requirements for Cyberpunk 2077 are unavailable, but we can speculate based on Red Dead Redemption 2's requirements—since that is also a new open world game. The specs used for the E3 2018 Cyberpunk 2077 demo also give us some clues, though that was running an early build of the game that may have been less forgiving to budget PCs.

Here's a slightly-modified build that should still be able to handle Cyberpunk 2077 comfortably (at least at 1080p and 60 fps) while keeping the price under $1,000:

For this build, we've swapped out the overclockable Core i5-9600K with a cheaper Core i5-9400F—the 'F' means it has no integrated graphics, which we don't really need on a PC with a graphics card anyway. It also has a less feature-packed motherboard, a SATA SSD instead of a faster (and more compact) M.2 NVMe drive, and a cheaper Radeon RX 5700 graphics card.

The GPU we've chosen here is still twice as fast as the Radeon RX 480—the minimum recommended graphics card for Red Dead Redemption 2—so it should handle Cyberpunk fine without cranking every setting up.

How to get deals on PC parts before September

Starting from scratch? Below are our buying guides for monitors, keyboards, mice, and headsets:

You can afford to wait for sales before purchasing all your parts for a Cyberpunk-ready PC—the game itself is set for release on September 17, 2020. While you won't be able to jump on any Black Friday deals, Amazon's Prime Day sales are typically held in July. It's also not uncommon for PC parts to go on deep discounts outside of major sales, if you keep an eye out.

So what's the best way to keep tabs on PC part sales? Well, for one, you can check our Hardware section once in a while—we sift through hundreds of sales and post about the best ones we find each day.

If you have a specific part you're waiting to nab on sale, there are a few services that can monitor product listings and notify you when the pricing changes. Honey and Keepa are two such services. Start tracking the components you plan to put in your build now, and by September you'll probably have saved a little money.