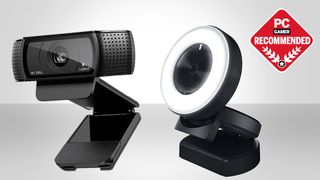 There's not reason not to add one of the best webcams to your set-up. Whether you're trying to break into the world of streaming on Mixer or Twitch or need an extra camera for your videogame-based baking show on YouTube, you'll want to look your best. Luckily, we've put together a list of webcams that offer a range of features to help show off your best game face.

So, what should you look for in a good webcam? The ones we've listed here record and stream at 30fps and 1080p—worth pointing out because some webcams will only do one or the other. Other features to consider are recording in HDR or even a built-in light, both of which add something to your overall production. While 4K might sound nice, it's not very practical for most content creators due to the cost and large file sizes involved.

A solid entry-level webcam is the Logitech C920 HD Pro which provides the best price and picture quality. Another of our favourites is the Razer Kiyo with its built-in light, making it a great choice if you don't have the real estate for mounted key lights. But If you're willing to part with your cash and want a more flashy option, the Logitech BRIO webcam has HDR and 4K support.

If you're serious about streaming, it's also worth checking out our guides for essentials such as the best capture card or the best microphone for streaming.

The best webcam for most people

Most readers can stop here. Unless you're looking for specific features in a webcam, then there is no better value than the Logitech C920 HD Pro. Its sharp 1080p images, paired with a wide field of view and great autofocus, make it a fantastic choice for video conferencing. Lowlight performance is great as well; the noise level didn't shoot through the roof when I turned off a few lights. White balancing was accurate most of the time, although the default saturation can make the scene look a little washed out in bright lighting conditions.

Most of the settings can be adjusted through Logitech's Camera App, a separate driver download. Streamers should also appreciate C920's excellent compatibility with the background replacement app, ChromaCam. All in all, the Logitech C920 performs its core duties exceptionally well and won't make you go broke.

For streamers, the C920 is a versatile webcam that'll make you look you're best when livestreaming to your legion of rabid followers.

As expected, the BRIO's high resolution bumps up the detail to a much higher level than any standard 1080p webcam. In addition, its 90-degree field of view can easily capture your entire room and all the guests in it. White balance and saturation are both very good, as is its low light performance. The only slight detractor in image quality is its iffy auto contrast settings. Alongside the main color sensor is an infrared sensor, making the BRIO fully compatible with Windows Hello, Microsoft's facial sign-in feature.

In addition to its astounding capturing resolution, the BRIO is also the only webcam that supports HDR capturing. This means that viewers who have an HDR compatible screen will be able to enjoy richer, more vivid colors.

The BRIO has three major weaknesses: buggy autofocus, high price, and narrow niche. My test unit consistently had trouble re-focusing on objects farther away after locking focus on things up close. This was very annoying as I had to either adjust it manually or maniacally dance around hoping that it would eventually track me again. Considering 4K is its only major strength, the nearly $180 asking price is hard to accept. Lastly, widespread support for 4K streaming just isn't here yet. So, while you can still upload your 4K recordings to Youtube, it's impractical for conferencing or streaming as the stream quality would automatically be compressed.

The best webcam on a budget

If you've ever set foot in an office or a school, chances are that you've ran into one of these. At less than $30, the Microsoft LifeCam HD-3000 is the best option for when you're pursuing a quality webcam on a budget.

The LifeCam HD-3000 only supports a maximum resolution of 720p. By today's webcam standards, this is a bit low. With that said, its resolution alone shouldn't be a deal breaker. The LifeCam HD-3000 scores decently on image sharpness, the most important factor in any webcam. Its color settings are pretty good, too, with properly calibrated saturation and good contrast.

What is bothersome is its overly sensitive white balancing. It can be very twitchy at times; randomly altering a perfectly good setting as soon as something flashes by in front of it. This can be annoying as it can apply an unnatural tint to your videos. And unlike most other webcams in this list, the LifeCam HD-3000 is strictly plug and play. To adjust its settings, you'll need to do so through the capturing app.

The most versatile webcam

The most dominant factor in image quality is lighting. Having good lighting can reduce the need for exposure compensation and curb noise. The Razer Kiyo has a ring light baked right in, making it suitable for any lighting condition, even pitch black. The light's intensity can be adjusted by turning its dial in its outer circumference, giving you more control over how brightly you want your face to appear. If you like streaming horror games in the dark, then the Kiyo is the webcam for you.

The Kiyo's 1080p sensor boasts excellent sharpness and captures plenty of detail. Autofocusing is speedy, and its white balance is on point too. Out of all the webcams I've tested, the Razer Kiyo has the highest color saturation. When the lighting is good, it can help add a great deal of vividness to your images. In darker scenes, however, the saturation boost can make images look pastel-like. The lack of a driver software means you'll have to readjust the color profile for every app individually, and it's something you'll likely want to do.

With all things considered, the Razer Kiyo still has excellent image quality. The attached ring light adds an extra bit of flexibility, earning it the crown as the most versatile webcam.

How we test webcams

Discord's video conferencing feature has taken the world by storm. As such, we've included it as a testing software alongside Skype. In both apps, we test the video quality at the maximum supported resolution. For streaming and video recording, OBS is still our choice go-to app, while images are captured in the default Windows Camera app.

I used OBS to both livestream and record video from each camera, testing them both fullscreen and scaled down to a "facecam" size. I also used each manufacturer's webcam software to take the highest possible resolution pictures with each and manually adjust settings like white balance, brightness, auto-focus, and others where applicable. Each of these situations were tested with multiple lighting setups from overhead fluorescent bulbs to nothing but the glow of the monitor in front of me.

The process of selecting the right webcam is much like choosing a good camera. Most of the metrics we use to determine camera quality also applies to webcams. You should pay attention to the image quality, color accuracy, focus speed, and customizable features. Although most of us have dedicated microphones, the onboard microphone can come in handy when in a pinch.

One of the greatest determiners of image quality is the amount of noise present in an image. When lighting is ample, most webcams have no trouble producing good image quality. The quality of a webcam is more accurately reflected in low light, where the camera needs to digitally compensate for the lack of light. Generally speaking, more expensive webcams come with higher quality sensors and usually have less pesky color blots compared to cheaper ones.

The other crucial aspect is the color of the images. Before we even begin to examine the color quality, we should pay attention to the white balance. White balance gauges the temperature of the lighting from your surrounding environment and sets the white point accordingly. If the white point is incorrectly set, the image may be masked with a blue or yellow tint. Unless a tuning utility is included, the white balance is usually automatically adjusted by the webcam's processor.

Next is exposure, saturation, and contrast—all three are equally important. Exposure is the brightness of the image, saturation is the depth of the colors, and contrast is the difference between black and white. Brightness ensures that you can be seen clearly, while saturation and contrast make your images pop. Again, unless a software is included, these settings are normally adjusted automatically by the webcam's processor. More expensive webcams are more adept at replicating the most accurate scene.

Software for webcams is just as critical—if not more so—than other peripherals. Although many streaming and conferencing apps have built in adjustment options, using the manufacturer's driver software allows you to adjust the settings globally.

Aside from the video quality, I also took a look at their ease of use. Each manufacturer has a different method of attaching a webcam to the monitor, so I tested them across different monitor shapes and sizes. I took into account whether the webcam cord was long enough to reach from the top of a monitor to a case underneath a desk. I tested how easy they were to angle, readjust, and if they would fall off or reposition themselves if I bumped the desk. I tested the plug-n-play nature of them and noted whether the webcams downloaded drivers or software automatically. Lastly, I recorded audio with their built-in microphones, but this was not a heavily influencing factor as a webcam should be bought with video in mind first.