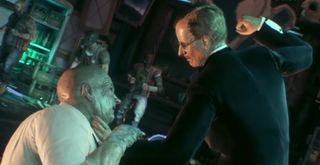 Not many PC gamers can, at this moment, play Batman: Arkham Knight because, as we all know by now, it's such a train wreck that Warner had to stop selling it. But if you are playing it, and you're looking for a little variety in your crimefighting career, why not give Batman a break and go bust some faces as Alfred Pennyworth, his loyal butler, instead?

The voice acting doesn't match up—it's still Bruce Wayne uttering the lines—and Alfred doesn't fight on quite the same level as the Caped Crusader. "His moveset is very limited, he cannot perform counter-attacks, environmental takedowns or dual takedowns," the YouTube description explains. "But he can still kick plenty of ass."

No doubt. The whole video is great, but watching Alfred threaten to break every bone in Oswald Cobblepot's body is a highlight-reel moment, especially with the way his fist is cocked menacingly—the fist that has served a thousand teas, now poised to break a thousand faces. That's what I call poetic justice.

The downside to being able to play as The Pummeling Pennyworth is that it's a stark reminder of the disastrous state of the game, which, more than a month after it was removed from Steam, still doesn't have a re-launch date. There's also something ironic about modders being able to make Alfred playable, while Warner and Rocksteady (and Nvidia) can't even make the game work acceptably. Maybe they should hire this guy?