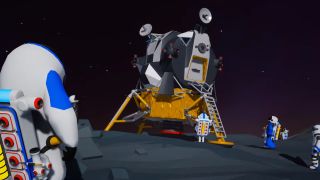 It's the 50th anniversary of Apollo 11, the first mission to take humans to the surface of the moon. Space sandbox Astroneer is paying tribute to that momentous occasion with some themed in-game items and the chance to listen to audio from the historic flight.

For a limited time, Astroneer players can travel to Desolo, the game's Moon equivalent, to search for the Apollo Lunar Module. Finding it will unlock a "vintage-themed spacesuit palette and visor," System Era Softworks says.

Additionally, there are approximately an hour's worth of audio logs taken directly from the Apollo 11 mission, featuring radio conversations from mission control and astronaut Mike Collins.

The tribute comes alongside a patch for the game called the Lunar Update that adds in new platforms and storage options.