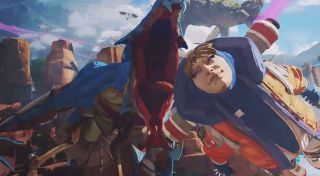 The Apex Legends Season 2 launch and gameplay trailers are now live on YouTube. The first video is animated razzle-dazzle that tells the tale of the EMP that disables Kings Canyon's repulsor tower and lets in all the beasties, setting the stage for some big changes to the Kings Canyon arena. The second features bits of actual gameplay, and showcases the state of the island after everything's been knocked around: Bridges are broken and buildings destroyed, new flora is growing in some areas, new base camps have been established, and "Kings Canyon will never be the same."

There's still no sign of the hacker who started all this trouble, but the trailer does highlight some of the new hotness coming in season 2, including legendary weapon and character skins, new skydive emotes, ranked leagues, and of course Wattson, the new character, who shows off her very interesting (and painful looking) finisher. It's not exactly a detailed look at everything coming in the new season, but there's clearly a lot of interesting new stuff on the way. (One question I have is, will those giant dinosaur things actually be stomping around inside the arena? Because that would be cool.)

Apex Legends Season 2 goes live on July 2. I imagine we'll be hearing more about what's coming before that happens.