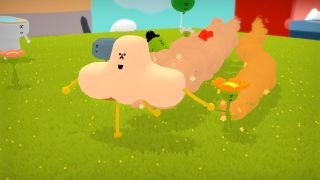 Rachel Watts played Wattam, the new game from the creator of the Katamari series, Keita Takahashi. Though there's no ball-rolling here it's still a bit strange. As Rachel explains, "In Wattam you play as the Mayor, a green cube wearing a black bowler hat who sports a dapper moustache." You unlock other cartoonish characters as you go on, each with their own goofy abilities, slowly collecting a toybox of weirdos. Sounds delightful.

Malindy Hetfeld played the PC port of Detroit: Become Human, and has managed to convince me this is one cyberpunk game I should skip. After playing Fahrenheit I don't have much confidence in David Cage's subtlety and hearing that in Detroit the oppressed androids literally ride in the back of the bus suggests he hasn't changed his ways.

Chris Livingston has been playing Red Dead Online, and tested out the new moonshine-themed addition. Thanks to a bug his wagon full of illegal hooch turned invisible, which is less Copperhead Road and more David Copperfield than I'd been hoping for.

Joanna Nelius played Afterparty, the game of outdrinking devils to escape from Hell. It's an odd one, the protagonists not the party-hard types you'd expect from that summary of its concept. As Joanna explains, "Afterparty sends you on a seemingly impossible mission, forcing you to question everything about Lola and Milo's friendship while simultaneously questioning your own moral code."

Andy Kelly has been replaying Blade Runner, which was recently rereleased. The point-and-click adventure is an atmospheric way to revisit some of the key locations from the movie, and even meet some of the same characters. It's a bit fanservice-y in that way, but I enjoyed it at the time. Still have the CDs somewhere.

I've been playing the Witcher 3's Blood and Wine expansion, finally finishing it a few years late. It's neat to visit the Arthurian France of Toussaint, and there's a character from the books whose return I was glad to see, but it's got some fiddly combat challenges I'm no fan of. Some of the fairytale monsters and the invisible bruxae and their alp friends in particular are right bastards. As someone who plays The Witcher for the story rather than the combat I enjoyed the Hearts of Stone DLC more, though Blood and Wine is still a fun send-off for Geralt.

Enough about us. How about you? Is anyone playing Mechwarrior 5: Mercenaries or Boneworks? Pick anything up in the Christmas sales? Let us know!