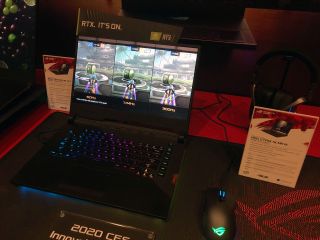 Update: Asus contacted me to point out it did end up launching its Zephyrus S GX701 with a 300Hz display, which is available on Amazon for $3,879. So, the race to be first has been won. Now it's a race for second place.

Original story:
Now that CES has kicked off in earnest, Acer and Asus are once again teasing gaming laptops with displays supporting ultra-fast refresh rates of up to 300Hz. There's still no word on which machine will be available to buy first, but it's no longer a two-horse race—MSI is saddling up a 300Hz stallion of its own. More on that in a moment.

We first heard about these laptops with speedy refresh rates back in September. Had things stayed on schedule, Asus would have launched its Zephyrus S GX701 in October, followed by Acer pushing out a Triton 500 laptop with a 300Hz panel in November. So, where are they?

As things stand, neither machine seems to have been scrapped, and today in Las Vegas Asus is showing off another 300Hz laptop, its ROG Strix Scar III (pictured top).

Asus is pitching this as the "world's fastest 300Hz/3ms gaming laptop display". It's the kind of thing that could find in audience among pro gamers participating in esport tournaments, though Asus claims there are more mainstream benefits as well.

"Higher frequencies can also improve the experience when the refresh rate is fixed and the FPS drops below the maximum. The delay between refresh cycles is shorter, allowing the display to respond faster to fresh frames produced by the GPU. When the system is running v-sync to eliminate visual tearing, the higher frequency mitigates visible stuttering that can occur when the display is forced to wait until the next cycle to show a new frame. At 300Hz, it's ready to draw a complete new frame every 3.3ms, which matches the 3ms response time of the pixels," Asus had previously explained.

At least one configuration will pair a Core i9 processor with a GeForce RTX 2070 GPU. I suspect we'll see a version with a burlier GPU at some point, as the added muscle makes it easier to take advantage of higher refresh rates. That said, the display resolution is 1920x1080. For less demanding games, a 2070 ought to be good enough.

Meanwhile, Acer is also previewing its Triton 500 gaming laptop at CES. I asked Acer if it knows when the laptop will launch, but was told it does not have an updated time frame to share at the moment.

This brings us back to MSI. The company announced at CES that an upcoming GE66 Raider laptop will be "the first gaming laptop with 300Hz built in." The insinuation is that it will beat Acer and Asus to market, though MSI is playing fast and loose with claims of being "first"—it also announced what it says is the first monitor with a 1,000R curvature, though I wrote about Samsung's 49-inch Odyssey G9 with a 1,000R curved panel last week. It's not out yet, so technically, MSI could still be first in that regard as well.

I don't have any inside information on the hold up, but it could be a validation or product issue related to the panel maker that is supplying the screens. We saw a similar situation play out when Asus was readying its ROG Swift PG27UQ and Acer its Predator X27, a pair of 27-inch 4K IPS monitors with 144Hz refresh rates, G-Sync support, HDR support, and 1,000 nits brightness ratings. They eventually arrived, and so too will these 300Hz laptops, at which point we'll be putting them through their paces with something a little more demanding than Hearthstone.