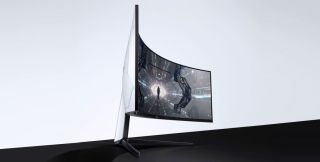 Extremely wide gaming monitors spanning 49 inches are not exactly old hat, but it has been done before, multiple times. In an effort to shake things up, Samsung's next 49-inch monster, the Odyssey G9, is just as wide as previous models but much more curvy.

The Odyssey G9, along with 32-inch and 27-inch Odyssey G7 models, are the first ever to feature an "extremely deep" 1000R curvature. What exactly does that measurement mean? I had to do some digging on good old Google to find out, and came across this informative explainer by Viewsonic.

When looking at curvature ratings, the "R" stands for radius, and the number preceding it is the measurement in millimeters. So, a 1000R curvature means it has a curved monitor radius of 1,000mm. The lower the rating/measurement, the more pronounced the curve.

In theory, the Odyssey G9 and G7 models should be more immersive than the many 1800R monitors on the market. I'm not real keen on curved displays, but I've also never plopped myself in front of a monitor with an extreme curvature like these new models. As far as the marketing pitch goes, Samsung says these have "been completely redesigned to give gamers an entirely new and immersive experience." We'll see (literally).

Beyond the sharp curvature, the G9's list of bullet points is impressive. It's the world's first "dual quad high definition" (DQHD) display with a 5120x1440 resolution to sport an ultra-fast 240Hz refresh rate and 1ms response time.

It's built around a VA panel that uses quantum dot technology, and boasts an eye-searing 1,000 nits brightness to bring HDR content to life (Samsung hints at it being DisplayHDR 1000 certified). It also supports AMD's FreeSync technology, and pending final validation, will be G-Sync Compatible as well (testing on both the G9 and G7 is currently in progress).

The 32-inch and 27-inch G7 models are a bit more pedestrian, though still on the higher end of the spectrum. They each feature a VA panel with a 2560x1440 resolution (single QHD) and 600 nits brightness, along with the same FreeSync and G-Sync goodies piled on top. As for their appearances, they're futuristic in design as well, albeit with a matte black exterior and color-changing rear core lighting.

All three models will be trotted out to CES next week, and presumably available shortly after. Samsung isn't saying anything about price right now, though if you're looking to bring the 49-inch model home, brace yourself for a price tag well north of a grand.