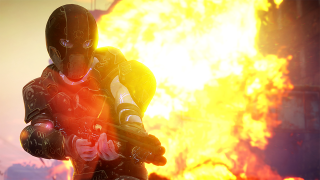 Remember Rage 2? It enjoyed a very high-profile pre-release marketing campaign, came out to very solid reviews, and then seemed to almost immediately fall off the face of the Earth. But later this month it will bounce back with Rise of the Ghosts, the first of two "major" expansions planned for release this year.

Rise of the Ghosts will add a brand new region to explore, and a new faction to shoot at: The Ghosts, a bandit clan from the original Rage that's been warped into something different in the wake of the Authority Wars by a mysterious woman named Iris. Now, infused with Feltrite and a newly-acquired taste for human flesh, they're ready to branch out from their base in the Overgrown City and reclaim their rightful place in the wasteland.

Helping you deal with all this cannibalistic nonsense is a new Feltrite Laser Launcher weapon and the Void ability that enables you to hold enemies in the air like a little rag doll before tossing them aside—or to pop their skulls like a zit, if that's more your speed. If you can find it, you'll also be able to add the new Ghost Motorcycle to your garage.

Rage 2: Rise of the Ghosts will go for 1500 Rage 2 Coins, which is another way of saying $15, and is included with the Digital Deluxe edition. It comes out on September 26.