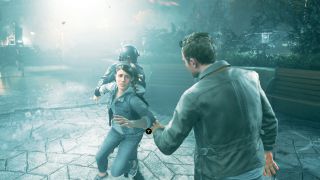 Each month in the 'now playing' section of PC Gamer magazine we spend a few pages discussing the games that have captured our attention—good or bad.

Sometimes they are old games we've been meaning to go back and try, like Quantum Break. Sometimes they're new or upcoming games, like Road to Guangdong. Sometimes you might get a story about stumbling back into a game we once loved, like Phil's unplanned trip into Team Fortress 2. Let us know what you're playing at the moment in the comments.

Finally going all the way with Quantum Break—Malindy Hetfield

This, my first encounter with Quantum Break, had the odd anticipation of a first date. I’ve annoyed my friends with it for ages⁠—what if I don’t like it? With heightening anxiety, I realised that their opinions were just making it worse. They have different impressions. The only way to find out was to actually commit and see for myself. So I invite it over and spend the length of a rom-com montage getting ready while watching the progress bar of a seemingly endless download. Then it’s time.

Sometimes starting a new game can be oddly nerve wracking. Wanting to give a game the attention it deserves⁠—to truly dive headfirst into an experience without getting distracted⁠—can be tricky when there’s so much stuff vying for your attention. That’s the best explanation I have for why I never played Quantum Break before. I wanted it to have my full attention, and I was already filled to the brim with everyone else’s opinions and expectations. Well, I’ve just finished my first date and what can I say? Love is blind.

Quantum Break is very camp. It has people shouting “noooo!!” before something terrible happens, things frequently fall from great heights and every meeting between characters has the tension of a potential standoff. It’s the very essence of schlocky videogame entertainment, pressed into the narrative conventions of television. My early 2000s self squeaks at Shawn Ashmore, all grown-up, before acknowledging Dominic Monaghan with the same teenage reverence.

Yes, everyone who’s already said it was right⁠—the live-action sequences don’t add anything meaningful to the overall experience, especially in a game that already has its fair share of cutscenes. Instead, I await the next opportunity to shoot at things.

I’ve never been a person to describe shooting in games as something that feels good, but in Quantum Break, it does. I know for people who regularly play shooters this isn’t much of a challenge, but I enjoy the needless zooming around and catching of bullets, and the way the very last enemy goes down in slow motion after each shootout.

This is the first game in a long time that made me aware of controller vibration to the point it seriously enhanced the experience. A lot of what you can do in Quantum Break seems to simply exist because it’s cool, as if someone literally said “here’s something else you can do with your power”, like those vague platforming sequences in which I slow and rewind time.

I don’t even play Remedy games for the narrative, more for the feeling, and the atmosphere they exude. Alan Wake gave me nightmares just with people warbling words backwards and jumping at me from the dark. Quantum Break offers time travel technobabble with a side helping of brilliant dialogue such as “the time egg is fucked”. What’s not to like?

I load up TF2 not with any serious intention of playing it. I’m here simply because I’m trying to figure out Steam’s bizarre Grand Prix sale event. Apparently if I play some casual matches I can earn points that do... something? I don’t know.

On the menu screen I notice a new button for something called the ConTracker. It seems to be a bounty system offering rewards for completing basic missions⁠—kill, capture, defend, etc. It’s all locked behind the Jungle Inferno Contracts Pass. On a whim, I buy it. I’ve been here less than five minutes and I’m already £1.89 down.

I queue up for a casual Payload game and load into Badwater Basin. It’s on the loading screen that the nostalgia hits. The long bar denoting the many hours I’ve played as Scout. The other long bar that stands as testament to a particularly notable kill streak as Spy on an unofficial server that nobody was taking very seriously. It’s been a couple of years since I last played it, but I’m back!

My team starts on defence. After some trouble relearning how to effectively play Soldier or Demoman, I switch to Medic and it all clicks back into place. Unconsciously I position myself in such a way as to heal my Heavy without exposing myself to danger, years of learned behaviour helping ensure I’m an effective teammate.

A friendly Sniper emerges from a nearby building. Wait, isn’t that a route frequented by Spies? A couple of thwacks with the Übersaw confirm that yes, yes it is.

We win the round and switch to attack. I’ve probably now done whatever I was supposed to do to earn Grand Prix points, but you know what? This is more fun. I swap to Scout and try to flank the defending team while they’re focused on the rest of my team. I take down a Sniper before a sentry finishes me off. This is the good stuff.

I think a lot of people assume that all the new weapons and modes and hats have slowly turned TF2 into an impenetrable, chaotic mess. I’m not sure that’s entirely accurate. With a couple of key exceptions tweaked for preference I’m still using the default loadout for every class, and never got the sense that I was at a disadvantage. Sure, sometimes the Pyros shoot energy beams now, but they still die to a surprise Scattergun blast in the back.

When I finished HBO’s brilliant Chernobyl miniseries, I found myself missing its muted, desaturated Soviet misery. So I thought about what games I could play to fill the gap. One of the STALKER games, maybe? They certainly have the aesthetic, and are literally set in and around Chernobyl. But, honestly, they’re too exciting. DayZ is set in a fictional Eastern Bloc country, Chernarus, that is steeped in a similar atmosphere. But I gave up on that game long ago.

I wanted something more realistic, more subdued. Something that captured the compellingly bleak, dreary mood of the series. And then I remembered that I hadn’t played Euro Truck Simulator 2’s new Beyond the Baltic Sea expansion yet, which adds Lithuania, Latvia, Estonia, southern Finland, and parts of western Russia to the already massive trucking simulator.

I start a new trucking company based in St Petersburg and I’m immediately struck by how different this part of the world feels. Developer SCS is getting really good at making each expansion feel unique, which makes cross-country road trips much more exciting. I see apartment blocks with Soviet-era architecture, Russian Orthodox churches, and adverts and road signs printed in Cyrillic. Even the licence plates on my truck are accurate to the region.

As I make deliveries around the region I see a row of monolithic high-rises painted in bright colours, a church on a secluded road silhouetted against a purple evening sky, and industrial complexes sprawling across the countryside. It’s remarkable how atmospheric Euro Truck Simulator 2 can be, and how vivid a sense of place it can create. To really capture that stereotypical late 1980s Soviet feel, I make sure I have rain probability set to max. Overcast skies just feel right here.

Beyond the Baltic Sea might not feature anything quite as dramatic as the Scandinavia expansion’s sheer mountain roads, or the lush coastal highways of the Italy expansion, but there’s a quiet, understated beauty to it. I’ve also noticed some new random road events, which are normally mundane occurrences, but in this instance was a Russian fighter jet that had fallen off a truck and rolled onto the road.

Beyond the Baltic Sea is another great expansion, but with the usual caveat that these DLC packs don’t change the game in any meaningful way. It’s just more places to drive.

A trucking simulator might seem like a weird way to scratch the itch of missing a gritty TV series. There are plenty of games that use or pay homage to the Soviet aesthetic, whether it’s weird time-bending FPS Singularity, strategy game World in Conflict, or punishing point-and-click adventure KGB. But only Euro Truck Simulator 2 manages to capture it in the same mundane, matter-of-fact way as the show.

The sun sinks behind the high rises of Foshan, sending long shadows in block formation across the highway. A lovely lavender light bathes the dash of my ancient Shanghai SH760. After about a minute, the light starts blinking. And then the engine cuts out. What I’d taken as part of the ambience might, in retrospect, have been a mechanical warning.

It’s 32 kilometres to the nearest garage. And many more to the farm in Shenzen, my destination. Luckily, a cursory examination of the car reveals I’ve run out of fuel. I switch to the outside view, pull open the cap, and pour a can of petrol into the engine. Not all of it⁠—just enough to get me to the garage, where I can fill up. Road disasters like these are common in Road to Gaungdong, and I’ll need the can again.

This is a road trip game, part of a new genre that takes Euro Truck Simulator and strips it for parts⁠—leaving just you, your vehicle, and the journey ahead. It taps into the strange serenity of long, boring drives, and the grounding connection of constant maintenance. Next to the fuel gauge on the dash is another to measure oil, which must be topped up to avoid engine damage. A third meter accounts for temperature, which will spike if the fan belt is loose. And a fourth⁠—well, I don’t know what the fourth gauge is for because it’s missing, the fitting opening onto exposed wires. The SH760 is an old car⁠—old enough to have a name, Sandy, and family history to rival that of your passenger, Aunt Guu Ma.

The aunt is almost as cantankerous as the vehicle, chastising protagonist Sunny over her taste for adventure.

When we meet up with other family members on the road, Guu Ma engages them in complaints about the young, and I get to work solving whatever narrative puzzle the game has set me. Sunny has inherited the family restaurant, and the goal of this trip across China is to win the approval of her relatives, as well as their recipes. Her kin all seem to be at pivotal points in their lives too, and by gathering enough insight I can help untangle their thoughts.

Publisher Excalibur has marketed Road to Guangdong in much the same way as Jalopy⁠—its better known, and practically only, genre mate⁠—and it’s hard not to compare the two. I miss the functions that deepen your bond with the car, like pulling the bonnet release catch, rather than swapping parts through a menu.

Yet there’s a particular flavour to Guangdong⁠—the pastel colours and the lulling soundtrack that maps Sunny and Guu Ma’s personalities across two radio channels. At first I found the gentle turns of its roads too simple, but now they’re soporific. If the game wants me to fall asleep at the wheel, I’m not going to fight it.