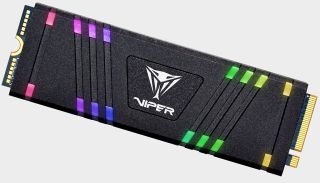 I don't know exactly how many M.2 form factor NVMe SSDs have RGB lighting (it's not many), but Patriot's new Viper VPR100 is one of them. It's also fast, at least on paper, though not quite as speedy as the small handful of drives that leverage the PCI Express 4.0 bus.

Not that it matters much if you're looking for the best SSD for gaming. PCIe 4.0 drives come with some caveats—they need to be paired with an AMD X570 motherboard to take advantage of their full speed capabilities, and even then, you won't see a difference in gaming versus a PCIe 3.0 SSD.

Even so, the VPR100 SSDs are fast in their own right. Patriot is offering them in four capacities, those being 2TB, 1TB, 512GB, and 256GB. Specs vary a bit by model, and depending on which metric you use (Patriot provides sequential read and write ratings from both ATTO and CDM).

Sticking with ATTO, here's how it all breaks down:

Write performance kind of falls off a cliff on the 256GB model, though on its own, it's still plenty fast. A decent 2.5-inch SATA SSD, for example, offers up around 550MB/s of sequential write performance (and can't go any faster).

The speed ratings are slightly different than Patriot's Viper VPN100 SSDs, which lack RGB lighting. There's no mention of what kind of NAND flash memory chips Patriot is using (probably 3D TLC, if I had to guess), but the disparity in specs leads me to believe the VPR100 is not the same drive, just with lights attached. The only technical bit Patriot is sharing is that these SSDs uses Phison's E12 controller.

The VPR100 SSDs are available now direct from Patriot, priced as follows:

The pricing is ambitious, even after factoring in the premium for RGB lighting. While there's not a ton of competition, Adata's XPG Spectrix S40G RGB SSDs are priced well below the VPR100 series right now, with similar rated performance numbers. Here's a look:

Perhaps Patriot's drives will be more competitively priced once they land at places like Amazon and Newegg. As of this moment, however, they're a tough sell.

And then of course there are drives like Crucial's P1. It's not an apples-to-apples comparison because the P1 series is slower (2,000MB/s read, 1,700MB/s write for the 1TB model) and lacks RGB lighting. But in terms of bang-for-buck, you can snag a 1TB P1 SSD for $99.99 on Amazon.

In any event, the VPR100 series is now available and backed by a 5-year warranty, for anyone interested.