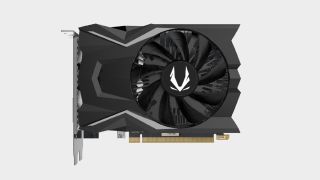 We're now just a few days away from the launch of Amazon Prime Day, which means it's an excellent time to be shopping around for the best Nvidia GeForce GTX 1650 deals. The 1650 is Nvidia's smart Turing budget play, stripping out all the dedicated ray tracing and DLSS hardware that accompanies the RTX cards in an effort to supplant the 1050 as one of the best budget cards on the market. And they've largely succeeded—the 1650 performs about 50% better than its predecessor, and it's an excellent card for small form factor builds and mini-ITX cases that won't accommodate a full sized card.

The best Nvidia GeForce GTX deals will let you score one of the Turing GTX marvels for right around the $150 mark, which is a pretty incredible price to dive into FHD gaming at very reasonable frame rates. The 1650 also has the advantage of not requiring extra power in a number of OEM models; it's capable of drawing enough power directly from the slot that an additional power connection from the PSU isn't necessary. It's more proof of how efficient and well designed Nvidia's Turing architecture actually is, and how little it requires of modern systems when you strip out the RT and Tensor cores. With Prime Day racing towards us, keep an eye on our Amazon Prime Day PC deals hub for the latest and greatest deals on all kinds of PC hardware, graphics cards included.

Asus is offering a broad range of GTX 1650 cards, including four dual fan options and one single fan configuration. MSRP starts at $154.99 for the single fan card and ranges up to $179.99 for the overclocked dual fan alternative.

EVGA is offering both single and dual fan models of the 1650, as well as dual slot and 2.75 slot options, for anyone needing more horizontal space. The 2.75 single fan option boasts a thicker heatsink and larger fan hub to provide more front-to-back space without sacrificing temperature maintenance or acoustics.

Gigabyte is also offering the 1650 in single or dual fan configurations. All of the Gigabyte cards have been overclocked—the single fan model is clocked at 1680 MHz (against the reference card's 1665 MHz), while the dual fan alternatives come at three speed options, with the base version at 1710 MHz, the Windforce card at 1785 MHz, and the Gaming model at 1815 MHz.

MSI has a single fan version that comes factory overclocked to 1740 MHz as well as a dual fan card at the same clock speed. There's also a third option, another dual fan part that's been clocked all the way up to 1860 MHz, which MSI appropriately calls its Gaming X model.

Zotac is currently only offering one version of the part, a single fan 1650 clocked at 1695 MHz. Zotac does offer its handy OC Scanner utility, which will quickly assess your system and provide OC recommendations that you can then apply with a single button press, taking a lot of the careful, iterative tinkering out of the overclocking process.