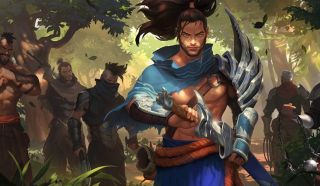 We described Riot's League of Legends-based card battler Legends of Runeterra last October as having "more than a passing resemblance to Hearthstone and Artifact," while still being more than a straight-up clone of either. A few lucky followers have been able to try it for themselves in previous "preview patches," but on January 24 the game will become available to everyone with the start of the open beta.

The open beta release will see the addition of a variety of new features including a friends list and "challenge-a-friend" functionality, ranked play, new boards and guardians, and updates to more than 20 cards. It will also kick off Legend of Runeterra's first ranked season, described as a "beta season" that will run until full release. Existing preview patch accounts will be reset, but Riot emphasized that there will be no further resets once the open beta is live, so everything you earn from that point on is yours to keep.

The Legends of Runeterra open beta will begin at 11 am PT/1 pm ET on January 24, or one day earlier for anyone who's played in the preview patches or pre-registered at playruneterra.com prior to January 20. (So you should probably do that.) Playing during the open beta phase will also get you a Moonstruck Poro Guardian when Legends of Runeterra goes fully live, which is expected to happen later this year. A detailed breakdown of all the changes coming in the open beta will be provided in the patch notes, which will be released at 11 am PT/1 pm ET on January 22.