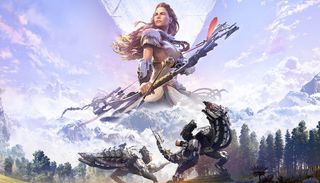 Horizon Zero Dawn is a game about a woman who beats up robot dinosaurs for some reason. Something like that, anyway—I don't really know, because it's a PlayStation 4 exclusive, and I'm not working for PS4 Gamer here. That may soon be about to change, though. Not my job situation (I hope), but the PS4-exclusivity: According to a Kotaku report, it's coming to PC later this year.

Console exclusives being ported to PC isn't all that terribly unusual, but this case is a little different than most because Horizon Zero Dawn developer Guerrilla Games is owned by Sony. Big PS4 exclusives like Quantic Dreams' Heavy Rain, Beyond: Two Souls, and Detroit: Become Human have made their way to PC, and Death Stranding is coming, but as Kotaku points out Horizon Zero Dawn would be the first major exclusive from a Sony-owned studio to be released for PC.

This isn't the first time someone has suggested that Horizon Zero Dawn is coming to PC. GamesRadar reported in December 2019 year that YouTuber Anton Logvinov, who accurately predicted that Death Stranding would be released for PC, said that Horizon Zero Dawn would be released for PC in February of this year. Admittedly, the Death Stranding call wasn't exactly a great insight, and February is just a couple of weeks away, which doesn't leave much time for Sony to get its proverbial ducks in a row. But it does lend some added credibility to the Kotaku report—and Kotaku has a pretty good record on this kind of thing in its own right.

If Horizon Zero Dawn does come to PC, it will mark a major change in direction for Sony, which has historically relied on exclusives to move consoles and build its user base. Microsoft has embraced the PC for awhile now, but that's more of a natural fit, since Microsoft also makes, among other things, Windows. Sony has less incentive to make that shift, so doing so would signal a real change in strategy going forward. But it would also be very good news for PC gamers.

(Also a big plus is that Horizon Zero Dawn is an excellent game. We didn't review it for obvious reasons, but it's got a 89/100 aggregate score on Metacritic, and that's not nothing.)

Bear in mind that it's all hypothetical at this point, as neither Sony nor Guerrilla have made any sort of official announcement. I've reached out to both for comment, and will update if I receive a reply.