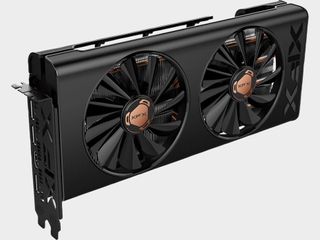 AMD formally launched its Radeon RX 5600 XT graphics card to retail today, and with it came an embargo lift on reviews and benchmarks (we posted our own review this morning). Fortunately, this is not a paper launch. Well, at least for the most part—there are several custom models available to preorder, but also a bunch that are in-stock and ready to ship.

Whether you should buy one depends on what you're after, in terms of gaming performance and value. In his testing, Jarred found the 5600 XT to be around 17 percent faster than Nvidia's GeForce GTX 1660 Ti at 1080p, on average, making it the "clear winner."

It's a tougher call when pitting the 5600 XT against the RTX 2060, in light of the recent price cut. Jarred found performance to be "mostly a tie" between the two cards, with the slight edge going to the RTX 2060. It also boasts hardware-level support for ray tracing.

In the end, the 5600 XT nearly matches the higher-end 5700 XT in performance, for $50 less (in terms of MSRP). If you're thinking about upgrading to the 5600 XT, I've taken the liberty of rounding up the available options. I'll start with the cards that are in-stock:

And here are the ones that are up for preorder:

On an interesting side note, none of the models listed show boost clocks exceeding 1,640MHz, including the Sapphire Pulse card. The review sample of that card Jarred received incorporated an updated vBIOS that bumps the boost clock to 1,750MHz. It's not clear which of the above cards will also receive an updated vBIOS to enable faster clocks.

Also note that base and game clocks, along with other features can and do vary by model. To keep things from becoming too overwhelming I've limited the above descriptions to boost clocks and the number of cooling fans.