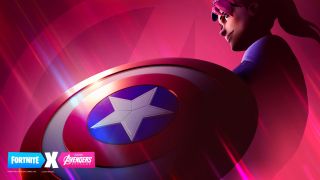 Update: There are still a couple of days until Fortnite's Avengers crossover event, just in time for Endgame, so that means more teases. This time, it's a picture of Stormbreaker, the fancy axe forged for Thor during Infinity War. It's so powerful it can batter Thanos, but in Fortnite you'll probably be using it to chop down trees and knock down buildings.

Original story: An Avengers crossover event is coming to Fortnite.

As is typical with these teasers, Epic hasn't given us much to go on—just a cheeky image with a Captain America shield and "Fortnite X Avengers" at the bottom—and the words "Whatever it takes" with a date: April 25, 2019.

And… well, that's it, my friend. That's all we know for sure. But at least we don't have too long to wait, eh—April 25 is just around the corner.

In other Fortnite news, Runes are back, and right in time for Fortnite Season 9. A floating, metallic object appeared last week near Paradise Palms, and players quickly discovered they could damage it. The mysterious object has a massive health meter, and it's shared by all players simultaneously.

As James opines, since the metallic architecture closely resembles the vault at Loot Lake, it's very likely they're connected. Here's hoping it doesn't upset the pros duking it out in the Fortnite World Cup qualifiers.