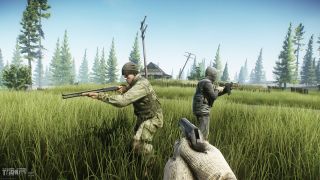 Developers Battlestate Games has stated that there are no plans to include playable female characters into the hardcore military shooter Escape from Tarkov. The statement was made as a response to questions about comments made in a 2016 interview.

Due to the game's current popularity on Twitch, a 2016 interview with wccftech has resurfaced where a representative of Escape from Tarkov explains the developer's decision to not have playable female characters is that "women can't handle that amount of stress" and that the battlefield of Escape from Tarkov was a place only for "hardened men."

Battlestate Games has addressed these comments in a Twitter statement explaining that the comments made where misinterpreted and that the employee was subsequently reprimanded. Battlestate then followed up with two more tweets explaining that it still stands by the decision of not including playable female characters due to lore and animation reasons.

"First—there are women in EFT already (trader, some future key storyline quests will have women as main characters). But there will be no playable female characters because of game lore and more importantly—the huge amount of work needed with animations, gear fitting etc."

But there will be no playable female characters because of game lore and more importantly - the huge amount of work needed with animations, gear fitting etc#EscapefromTarkovJanuary 6, 2020

The comments made by Battlestate Games are reminiscent of those made by Ubisoft back in 2014 when asked why Assassin's Creed Unity co-op decided to skip female playable characters. Ubisoft explained that making female animation models was "a lot of extra production work."