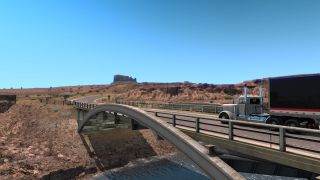 Death Stranding isn't on PC, and won't be until the summer. It's cruel, is what it is. We've been denied Kojima's promise of 3D printing a vehicle, loading it with cargo, and driving it down a freshly laid freeway all the way to the west coast. A sort of American truck simulation, if you will.

OK, I've googled 'american truck simulator' and it turns out there is something we could try. Like Norman Reedus, we're going to reconnect this divided country through the power of logistics alone. We're going west, baby, with a trailer full of peace, love, and heavy metaphors. Or empty pallets, depending on the preference of my employer.

Our journey starts as far east as SCS Software's North America goes, which is Roswell, New Mexico. It's a long way from the ocean, but where better to start a mission of connection than in the city where humankind first confronted the extraterrestrial? Or, if you believe the US military, mistook a surveillance balloon for a UFO and spent the next 70 years banging on about it?

An effigy of a green man waves us out of the depot with a shipment of frozen food. The sat nav recommends we take the 285 out of town, but I've chosen a detour along the 54 instead. That way I can make a quick pilgrimage into UFO territory.

The polyrhymthic punch of Tool accompanies the first leg of the trip, which means I don't hear the cab collide with a concrete barrier on the verge. The crash turns out to be providence, though, since it leaves me stock still at the door of the local museum, dedicated to Billy the Kid.

Kid had shot eight men dead by the time he was 21, and didn't do much else before he was shot dead himself, becoming one of the most notorious legends of the Old West. Back then, the race was to bring infrastructure to the frontier, the railroad that signified civilisation. I'm in the business of infrastructure too. Perhaps if he was around today, John Wayne would be driving frozen goods to Albuquerque.

A track runs parallel to the highway, and for a little while I chase cargo trains across the desert. Then, squinting, I spot something flying low above the road. It's zipping erratically, threatening to strafe the electricity poles.

I can hear Tool's Maynard James Keenan's UFO garble in my ears: "Just then a flaming stealth banana split the sky, like one would hope but never really expect to see in a place like this…"

The unidentified object cuts closer. It's coming in fast, now, but not too fast for my screenshot key. I eagerly check my gallery.

The skies are pink by the time I roll into Albuquerque, and the customer is getting antsy. Luckily, my bump hasn't damaged the goods. Honestly, freezing your cargo is the way to go. Boba Fett would tell you the same.

Truck Simulator has always dealt with inbetween spaces, the service entrances and lay-bys of the world. But here they take on a more sinister edge thanks to Albuquerque's most famous export, Breaking Bad. The darkness on the road out to Show Low, Arizona, is the stuff of stakeouts and kidnappings, and the first smiling face I see is that of a criminal defence lawyer on a billboard. Who drives in the desert at night? Only truckers, and people who kill truckers.

Now entering Apache County. In the blackness, it's tough to believe anybody's ever taken the 60 west before. It looks as if the road is being drawn for the first time by the paintbrush of my headlights.

Two men once decided the 100,000 acre ranch they shared wasn't big enough for the two of them, and decided to settle the matter over the mother of all poker games. "If you can show low, you win," said the first. "Show low it is," replied the second, and promptly turned up the lowest card in the pack. "Shit, that was a really bad call," said the first, before curling up into a ball and joining the tumbleweed on the road out of town.

Today, Show Low's main street is named Deuce of Clubs. It's a tarmacked reminder that human connection isn't for everyone. Not that a truck driver needs reminding.

I'm going to need to nip back across the border to New Mexico to pick up the tires for my next job. And I'm going to need to put on the storming 1956 soundtrack to The Searchers. It might sound counterproductive, but like Kojima, I'll happily take a circuitous route to hammer home a few themes.

I'm driving a gleaming white truck today—in the palette of Western movies, that makes me one of the good guys. The roof comes low over my windscreen, like big frowning eyebrows. Sometimes I can only see the traffic lights change by the reflection in the hood.

The night falls off like a veil just outside Gallup, where Reagan would stay while filming his Westerns. It's not the nearby Grand Canyon I'm interested in—a symbol of separation, if anything—but Monument Valley.

I like big buttes and I cannot lie. I gasp when I see it—the first, famous rock formation, like a 1,000 foot tall Diglett. These five square miles formed the backdrop of John Ford's most famous movies, which shaped the western hero: the man who marks the trail for society, but has no place in it himself.

The next stop is Kayenta, where the roads are cracked by heat. With its six lane highways at four-way crossroads, it proves a regrettable return to crowded civilisation. "What makes a man to wander, what makes a man to roam," croon the Sons of the Pioneers in the theme to The Searchers. "What makes a man leave bed and board and turn his back on home?" I think I'm beginning to understand. I take the advice of the Sons and ride away, speeding west on my 600 horsepower steed.

Check back tomorrow for the second part.