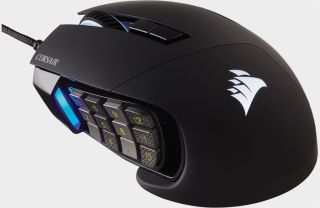 A few weeks ago, Corsair announced the Scimitar RGB Elite, an upgraded version of its 17-button Scimitar RGB Pro. The two rodents look identical, but the Elite is lighter and more nimble. It's also now available to buy for $79.99.

This mouse has more buttons than I have fingers, and more than three times as many buttons than digits adorning my right hand (the mouse is ergonomically designed for right-handed users). The bulk of them are thumb buttons, 12 on the left side of the Scimitar RGB Elite, in addition to the two primary clickers on top, a scroll wheel, and two buttons that sit just below it.

Many would consider that little more than a bragging right, and settle in at a much lower DPI setting. Regardless, on paper it is technically superior.

As with the Pro model, the new Elite version works in conjunction with Corsair's iCUE utility. This allows users to customize various settings, including four RGB lighting zones, and run through a surface calibration routine.

In addition to the upgraded mouse, Corsair also rolled out a new extended mouse pad, the MM500 3XL. It measures 1220x610mm, so it's both long and wide. Corsair also claims the "precision-stitched" design on the border of the mouse pad will prevent the edges from fraying.