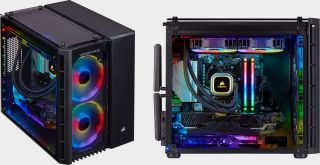 Even though Corsair acquired Origin PC last year, it still intends on building and selling its own line of branded gaming desktops, including its Vengeance series. In fact, it just added a couple of potent AMD configurations to its Vengeance lineup.

They're part of the company's new Vengeance 6100 series and include the 6180 and 6182. As it relates to the part selection, there is not much to gripe about. Both setups pair AMD's 8-core/16-thread Ryzen 7 3700X processor with a Radeon RX 5700 XT graphics card. That's a strong foundation to build upon.

The CPU sits underneath Corsair's Hydro H100i RGB Platinum liquid cooler, which is a self-contained unit comprised of a 240mm radiator and two 120mm fans. It's the biggest that will fit inside the relatively compact Crystal Series 280X RGB enclosure.

Here's where things get weird. Both systems are available now, with the 6180 listed at $1,999.99 and the 6182 listed at... $1,999.99 as well. These prices are consistent with the information in the press release, but why do they cost the same if the 6182 is a higher end setup? That's a good question, and I'd be happy to answer it once I receive a response from Corsair.

You could get those prices even lower by playing around with precise component selection, but as far as an apples-to-apples comparison goes, the 6180 represents around a $410 premium over building the same configuration yourself, and around $228 for the 6182.

Whether it's worth it depends on how you feel about building your own PC, fussing with cable management, and how much value you put into having a central company handle any warranty needs that might arise (Corsair backs the Vengeance 6100 series for two years). Also, it sure seems like Corsair goofed up on pricing and that the 6180 should be cheaper, because there's no point in buying it when the 6182 costs the same. As well, a $228 premium is easier to swallow than a $410 premium. Maybe an adjustment is on the way, I don't know.

What I can say is that Joanna was generally impressed with the build quality and performance of the Vengeance 5180 she reviewed last year, which paired an Intel Core i7-8700 CPU with an Nvidia GeForce RTX 2080 GPU. She'll also have a review of the 6182 posted later this week, so stay tuned.