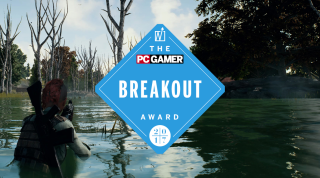 PC Gamer's breakout game this year is PUBG—this award is to recognise its status as a 2017 phenomenon. Whatever you thought of it, it was a game that pretty much everyone had to play this year. Below, some of PC Gamer's writers relay why they enjoyed it this year, and explore why it became as huge as it did. Find our GOTY hub here.

Chris Livingston: PUBG aimed for the sweet spot between the intimidating complexity of Arma and the arcade-like action of H1Z1, and hit the mark pretty much dead on. It can't be denied that H1Z1 (formerly King of the Kill) was a massive hit, with millions of copies sold and a playerbase keeping it at the top of the Steam charts for months, but PUBG truly took the genre into the mainstream, attracting scores of players who had never set foot in battle royale before. The premise seems simple, but we've seen both BR modes (like Ark: Survival of the Fittest) and standalone BR games (The Culling) fizzle out, so there's clearly more to it than just dropping 100 players on a map and letting them shoot each other. Whatever that secret formula is, PUBG mixed it up in a lab, poured it into an Early Access beaker, and it fucking exploded.

Evan Lahti: It's one of the few multiplayer shooters with a sense of pacing. Beginning: goofing off on the spawn island; streaking like meteors toward the ground; a mad, bloody dash for a gun, any gun. Middle: Playing dress-up with gear; jumping your motorcycle off a cliff; shooting the shit with your friends over voice chat. End: A sudden firefight, or crawling on your belly into the final circle.

Brace yourself for an avalanche of Battle Royale games in 2018 and 2019. And honestly: bring it on. I love the way that this format of FPS respects your time and pretty much guarantees a combination of tension and comedy whether you die in 20 seconds or win after 20 minutes.

Tyler Wilde: What I love about the genre is that every match has an intrinsic winner. There are no points to tally, just one player left lying in a bush. It's a win by KO, whereas most shooters come down to a decision—overtime on an Overwatch point, for instance. Battlegrounds itself isn't very pretty, has unruly vehicle physics, and a serious cheating problem, so why has it been the year's phenomenon? For one thing, it’s an infinite highlight clip generator: those wonky vehicles can be funny as well as annoying. Plus it's got a weird, memorable acronym. I genuinely think that did some work for it.

Samuel Roberts: I think Evan put it best in his PC Gamer Top 100 entry for PUBG: "it compresses the time and space that survival games like DayZ give you, forcing you into contact with other players and out of your comfort zone." And that's the magic of Battlegrounds, really: it concentrates the drama and paranoia of players meeting in a survival game, making the game entirely about the conflict that follows. PUBG's formula is magic, no matter how you choose to play (cowardly, in my case). And no matter where you finish, you'll always have a story to tell. It's disposable in the best possible way.

Joe Donnelly: Like any online game worth its salt, much of what makes Battlegrounds special is its incidental set pieces. You know the ones, the unscripted moments that catch you off guard and make you smile—where you've perhaps entered an enemy base by motorbike via its second floor window, or somehow wind up finishing second place in search of a bare-fisted chicken dinner. And beyond its high-pressure shoot outs, dashing and running, vehicle explosions, ducking and covering, there’s something to be said about PUBG’s sense of exploration. In May, Gil Lawson wrote about how Battlegrounds' map gets more haunting as you play it, where revisited locations cast up memories of previous encounters, misadventure and triumphs. I couldn’t agree more, to the point where I now enjoy the game’s quieter spells almost as much as its flashes of action. With the release of the desert map, Miramar, I look forward to exploring pastures new.