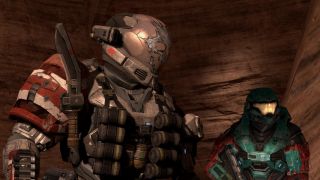 Deals season dominated the start of the week, but as Monday's peak Cyber levels dimmed into the background radiation of the universe, PC gaming marched along toward the end of the decade with a PC homecoming for Halo, new footage of Netflix's Witcher series, and a smattering of announcements. Here's what happened this week in PC gaming:

Halo: The Master Chief Collection hits the top of the charts on Steam

It turns out that PC gamers were hungry for Halo. The first game in the collection to release, Halo: Reach, isn't the most popular of the series, but the dedicated servers are filling up anyway. It helps that it's quite a good port aside from some audio and screen tearing issues—here's our review.

A couple weeks ago, we were wondering what happened to Firewatch developer Campo Santo's next game. Knowing that some of the team has been working on Half-Life: Alyx following their acquisition by Valve, we assumed they might've all taken up other projects. That's been confirmed, and it's unclear if In the Valley of Gods will ever be finished.

Netflix's Witcher series arrives on December 20, and the promotional tour has begun. First up comes a brief preview of a sword fight in which we learn that armor is just a cosmetic upgrade in Geralt's world. Check out that clip below:

After recently announcing that it's working on four new games, Riot has revealed that even more LoL is coming in the form of singleplayer games by other developers. I hope the atmosphere within Riot—which will pay $10M to settle a gender discrimination lawsuit—is advancing as quickly as its ambition.

Battlefield 5 is getting Wake Island and custom games next week

Only a handful of maps register as classics to me—Dust 2, Facing Worlds, and The Longest Yard among them—and Battlefield 1942's Wake Island is definitely in the mix. Its return in Battlefield 5, and the addition of custom games, has me keen to reinstall it.

It is a goofy name, it's been a while since I've played any Left 4 Dead 2, and it feels like a good time to add a new 4-player co-op shooter to my life. Sometimes I need a break from getting tilted in Rainbow Six Siege, and unless I'm mistaken, I don't think GTFO's zombie-things spam 'learn to aim' at you. (Although that would be a cruel way to design truly loathsome enemies.)

Discovering useful and absurd Red Dead Redemption 2 mods has been a highlight of its PC release. For instance, Andy tested out a mod that maxes out his inebriation with one button, which you can see the results of below as he dances with sheep. (The boogalewe?)

Andy also wrote about a freecam mod that allowed him to take some stunning landscape shots, and Fraser found an upcoming role reversal mod that'll put you on the side of the law, if you prefer solving crimes to committing them for some reason. (I can't fathom it.)

After a brief Rockstar Launcher and Epic Store exclusivity period, Red Dead Redemption 2 launched on Steam this week, where it's sitting at mixed reviews. The thumbs downs are coming from those experiencing technical issues: some with crashing, others with Rockstar Launcher troubles. (Even if you launch RDR2 through Steam, the Rockstar Launcher insists on joining the party.)

I managed to navigate the Steam and Rockstar Launcher combo alright, and RDR2 runs OK on my aging GTX 980, but with some big compromises throughout the settings. It takes a bit more tinkering than I'd like—restarting the game and running the benchmark multiple times—to strike a balance between framerate and quality, but I've gotten it to a playable place. Half a decade old is getting up there for a GPU, so clearly I'm due for a 2020 upgrade.

That's it for this week's recap. Next week we'll be looking at MechWarrior 5: Mercenaries, GTFO, and the return of Wake Island as we also prepare our Game of the Year Awards, retrospectives on the decade behind us, and looks ahead to what the '20s may hold for PC gaming.