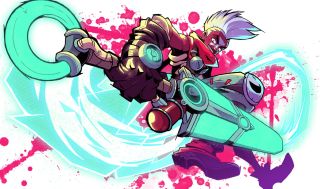 League of Legends studio Riot Games recently announced plans to move beyond the mega-MOBA League of Legends with a pile of new games including a fighting game, an FPS, a card game, and even a management sim. But it's also looking to broaden the appeal and footprint of League of Legends with a new publishing label announced today called Riot Forge, through which it will partner with other developers to create "bespoke games that enable players of all types to experience League in new and exciting ways."

The FAQ at riotforgegames.com says that Riot Forge releases will be "completable," which Riot's Bret Forbus nailed down more precisely on Twitter as "single-player/story-driven games" set in LoL's Runeterra universe. There are no specifics yet on individual projects or partners, but Riot said that its focus is on working with "experienced" independent studios, and that development of some projects is already underway.

"Our developers are still early in the process of creating these great games," the FAQ states. "When they’re a little further along, we’ll announce the games that they are making."

The initiative could be similar to the one that led to Cadence of Hyrule: Crypt of the NecroDancer Featuring The Legend of Zelda, the 2019 rhythm roguelike developed by Crypt of the Necrodancer studio Brace Yourself Games and published by Nintendo. It's not an obvious crossover, and definitely not something expected from Nintendo, but in spite of that it came together quite well.

At least one of the promised game reveals is coming soon: Geoff Keighley said on Twitter that a Riot Forge project will be revealed next week at The Game Awards. We'll be covering the big show as it happens on December 12, beginning at 5:30 pm PT/8:30 pm ET.

.@leagueoflegends is one of the biggest franchises in gaming and it's coming to #TheGameAwards next Thursday night. Join a @riotforge developer at #TheGameAwards for the global announcement of a brand new game. pic.twitter.com/ZlTSi29WZCDecember 5, 2019