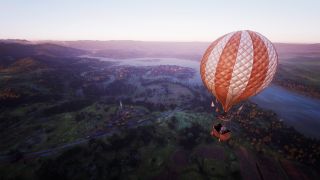 I'm still waiting patiently for the day when the modding community figures out how to get airplanes and helicopters into Red Dead Redemption 2, but until then this hot air balloon mod by Krank will have to do. Once installed you can conjure up a balloon wherever you are and fly it around freely, getting some amazing bird's eye views of Red Dead's sprawling slice of the Wild West.

The balloon moves way faster than it realistically should. Don't expect to find an accurate simulation of a hot air balloon here. But it's a thrill being able to float around that massive world without being stuck on the back of a horse. The latest version of the mod added inertia and smoother controls, and it even has controller support if you're playing Red Dead with a gamepad.

Installing the mod is as simple as dropping a file into your game directory. Just make sure you have Script Hook RDR2 otherwise it won't work. To spawn a balloon, hit F8 and you're ready to fly. And don't forget to check out our list of the best Red Dead Redemption 2 mods for more ways to transform the game. Just don't go online with mods installed or you might get banned.