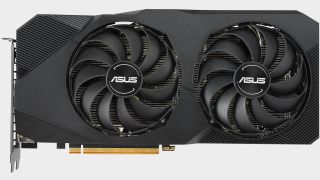 The Radeon RX 5700 is one of AMD's best graphics cards right now, with comparable performance to Nvidia's RTX 2060. If you've been looking for a new GPU, one dual-fan version of the RX 5700 from Asus is just $290 right now—making it the cheapest 5700 on Newegg right now.

The model on sale has 8GB of GDDR6 memory, a core clock of 1565 MHz, a boost clock of 1750 MHz, and 2304 Steam Processors. For video output, you get one HDMI 2.0b and three DisplayPort 1.4 connectors. The card also has a protective backplate, which you don't always see on cheaper versions of GPUs.

The RX 5700 is a great option for 1440p gaming, and can even handle some games at 4K—though the 5700 XT is a better option if you have a 4K monitor. You can read more about the card's performance in our full review from earlier this year.