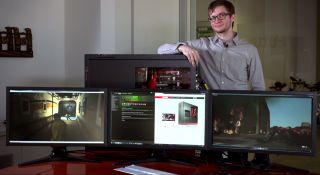 As funny as this sounds, when we built our absurd gaming supercomputer, the LPC , we actually hadn't picked out what displays we were going to use. We knew that 4K was our minimum goal , but many companies remain at the prototype stage for their 4K monitors.

After running a single 2560x1600 monitor initially, we elected to try a triplet of 2560x1440 displays from ViewSonic. Together, the three VP2770 s give us the equivalent of about five 1080p monitors in pixels. Pardon us while we fan ourselves. We'll be using these monitors to show you more absurd-resolution screenshots and videos of PC games.

See what's inside the Large Pixel Collider , our own personal demigod of a PC.