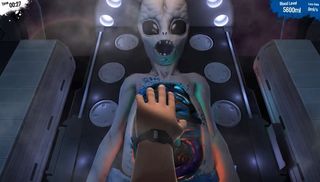 Developer Bossa Studios recently released a free update to Surgeon Simulator 2013 that added zero gravity surgeries while orbiting our dear sweet earth. But neatly tucked away in that update was an ARG named Codename: Trisha. A few keen surgeons-in-training cracked the code and carved a new path in the field of medicine: alien surgery.

The Surgeon Simulator community solved the ARG through trial and error and took around two nights to find all of its answers. The team solved the first four puzzles, focused on unlocking specific numbers, but admitted to brute-forcing the final two digits. Those interested in exactly how the ARG was solved can check out this blog post.

For those who haven't experienced Surgeon Simulator, imagine switching your dominant arm with a undeveloped clone of your foot and having half of your cerebellum (controls hand-eye coordination) violently ripped out of you. Congratulations! You are more capable than any surgeon in Surgeon Simulator. It is possible to complete a procedure, but the real fun comes from things going horribly wrong in the blink of an eye. Watch the video above if you want a better idea.

Solving the ARG unlocks six different alien transplant surgeries. Of course, aliens have different organs than we do — they're aliens. But Surgeon Simulator doesn't care if you don't know what a Gobbleshaft looks like. Your job is to fix that alien up and bring him back home to his alien family, hopefully while collecting massive amounts of space bucks from the alien's health insurance agency.