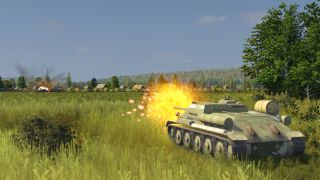 Steel Division 2 has been delayed for another month in order to let developers, Eugen Systems, gather more player feedback and roll out relevant updates. The game is now set to launch on June 20.

It's not all bad news though—if you've pre-ordered the game, the delay will mean more beta time, which will allow players to test out various game modes and maps, as well as the five-player co-op. The next phase starts today and will run for five days until April 23. Another phase is then planned for sometime between then and the final beta, which starts on May 29 and will remain open until the official release in June.

The World War 2 RTS is a sequel to Steel Division: Normandy 44 and features turn-based army management and real-time tactical battles. Fraser had a lot to say about it in his Steel Division 2 preview in August and he spent even more time with the game when he tried out the Breakthrough mode, last month.

You can check out the full announcement over on Steam.