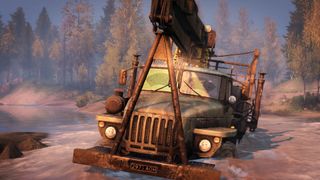 Spintires is very much a niche game. It's about driving rough, rugged, Soviet-era vehicles through mud deep enough to drown a giraffe. And that's really about it. Even so, it found enough of an audience to sell 100,000 copies in relatively short order, making it a legitimate indie hit, but things seemed to turn sour late last year when developer Pavel Zagrebelnyj said publisher Oovee had made off with the money and frozen him out of his own creation.

But in a statement posted today, Tony Fellas of Oovees blamed most of the trouble on "communications issues," with both customers and Zagrebelnyj, which have now been cleared up. "We openly admit that communications between Oovee and our customers have been weak over the last few months. Our customer base grew far beyond what we initially expected and we needed to cater for that quickly—the development plans became sketchy and before we knew it we had a runaway train. Please accept our apologies," he wrote.

A small bug-fix update to Spintires is currently in testing, while a larger one expected in April will incorporate mod support. A DLC release is expected to come out in the summer, and plans for a proper sequel are also being kicked around.

"How can we possibly talk about the next iteration of Spintires when we still haven’t finished improving the current version of Spintires? Well to be fair, software is never finished and we understand that. But with the huge success of the Spintires release, it’s kind of a no-brainer but to continue the franchise and create an even better game with a larger team and a larger budget," Fellas wrote. "So with great pleasure we can confirm that planning has commenced for the next iteration of Spintires, whatever form it may come in."

In a follow-up post, Zagrebelnyj said images of a Skype chat in which he reportedly made disparaging comments about Oovee were faked. "I was pissed with our situation but I never said anything like it… Thanks to Tony our "communication" problems are now in the past, so expect new cool stuff for Spintires soon!"