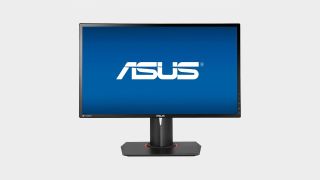 The ROG Swift series is one of our favorite gaming monitor lines, so we took note when we saw this Best Buy holiday deal for a 1080p Swift monitor with an 180Hz refresh rate for $250. It’s the right choice if you don’t have the space for a large screen, or the hardware to bump up the resolution to 1440p, but still want the performance of a premium gaming monitor.

This feature-packed monitor usually retails around $400, which is a bit of a steep price point for just a 24-inch 1080p display. Then again, it has all the bells and whistles of the Swift series, such as all the Gameplus features like on-screen crosshairs and an FPS counter, and the 180Hz refresh rate is only outdone by 240Hz displays right now.

At $250, the Swift has become a viable option if you’re serious about your competitive games. The 1ms response time is part of the reason the ROG line shows up at fighting game and shooter tournaments, where a millisecond could mean a win or loss. The ROG Swift is also G-Sync compatible, which means its refresh rate matches your game's framerate when using an Nvidia card, eliminating screen tearing.

If you’re still unsure about the Swift, see it how it compares against the best gaming monitors in case you’re thinking about upgrading to a 1440p or 4K display.