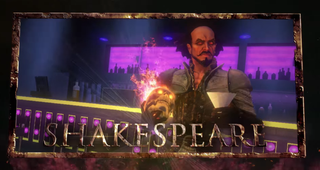 Famed wordsmith, baldy, and legendary comedian William Shakespeare is to star in Saints Row: Gat out of Hell, the standalone expansion to the fourth game that's both free and very cheap on Steam for the next 10 hours or so. Look, there he is in the above, infomercial-style trailer, along with his bessie mates Blackbeard and Vlad the Impaler.

A reminder: Gat out of Hell takes the Saints down South (no, not to Australia), in a plot that sees Johnny Gat and Kinsie rushing to prevent the President—i.e. you in the previous game—from being wedded to Satan's daughter against his will. Because that's the kind of series Saints Row is now. It's also a bit like Frozen, amazingly enough:

Gat out of Hell releases next week, on the 20th, alongside an upgrade of Saints Row IV for the PS4 and Xbox One. Not that you need that, of course—you can pick up IV and all its DLC (minus Gat) on Steam for peanuts.