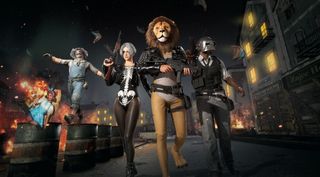 PlayerUnknown's Battleground 4.3 update went live this week, introducing the new Survival Mastery system and a bunch of shotgun changes. PUBG Corp also added a bunch of Halloween skins to the store, including a lion who is far, far too happy about jumping into a war zone.

The Leo Jumpsuit lets you dress up as a lion (and then dress that lion up), but it's not all wholesome family fun. See, Leo has a tail, and that tail doesn't naturally flop around like you'd expect—it's a bit stiff. This is especially noticeable when you're dropping into a game, at which point the tail appears between your legs.

Yes, that's a lion with his cock out.

PUBG Corp says it removed the skin to resolve an issue, though what issue wasn't specified.

"Please be aware that the "Leo Jumpsuit" is temporarily unavailable for purchase as we work to resolve an issue related to this skin," PUBG Support tweeted. "Any players who have already purchased the skin will have their BP refunded."

C'mon PUBG Corp, just admit it's because there's been some accidental lion willy.