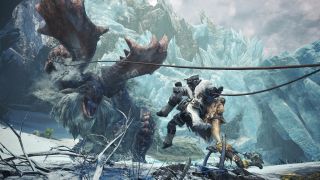 The folks at Capcom are no doubt feeling chuffed with the success of Monster Hunter World: Iceborne, which launched on consoles last year and PC on January 9. Thanks to the recent PC launch, Capcom's shifted an impressive four million copies.

"MHW:I achieved 4 million units shipped as a result of the titles' January 9 PC release on the globally accessible Steam platform," says Capcom, "allowing the game to appeal to a wider fan base spread across a greater number of regions, combined with sales of the home console version of the game released in September 2019."

The publisher hasn't revealed what the split is, though given that it's been out for a lot longer on consoles, that's probably where the bulk of the sales were. It definitely seems to have resurrected interest in the PC version, however, which is currently enjoying nearly as many players as it did at launch.

The launch of Iceborne on PC hasn't been entirely smooth, however, with lots of players reporting performance issues and corrupted saves. Thankfully, the next update aims to tackle both of those issues, hopefully cheering up disappointed hunters.

As for the base game, it boasts 15 million sales, so there are still plenty of people yet to put on some warm clothes and hunt down the new monsters.