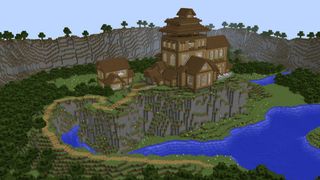 Minecraft: Bedrock Edition now supports full crossplay across all platforms, following the imminent arrival of that edition to PlayStation 4. Sony confirmed the news in an announcement today, with the update expected to go live "tomorrow".

It's great news for PS4 fans, as until now players on that platform have been limited to playing with other PS4 owners. It's also noteworthy for the fact that Minecraft is now a Microsoft property. With the PS4 and Xbox platforms constantly at war over marketshare, it demonstrates that an up-to-date Minecraft is important to both stakeholders. What next, Masterchief skins in The Last of Us: Part 2? (Joke, obviously).

Of course, this crossplay functionality only applies to the Bedrock Edition, ie, the edition available on the Microsoft Store. If you're still using Java Edition - which, if you're into modding, you probably are - then you'll still be restricted to playing with other PC users of that version.

While Sony has long supported crossplay between PC and PS4, it's been a bit reluctant to roll out the functionality to other consoles. But that apparently changed in October, with SIE CEO Jim Ryan implying that crossplay is now A-OK.