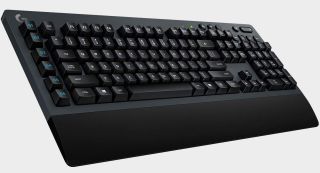 We're in the final stretch of the holiday season, and hardware sales keep popping up—now you can get a wireless Logitech gaming keyboard for $55.99 from Amazon. That's not a massive savings from the previous $60 cost, but it is the lowest price the keyboard has ever been.

This keyboard uses Logitech's proprietary 'Lightspeed' wireless technology, and should be free from the frequent connectivity issues you'd get from a typical Bluetooth keyboard. However, if you do want to use Bluetooth (perhaps with a tablet or other device that lacks a USB port for the wireless adapter), you can switch between connections with a single button press.

Other features include six programmable keys for performing macros, Romer-G mechanical switches, a 1ms response time, and a battery life of up to 18 months on a single pair of AA batteries. The only major downside is that there is no RGB lighting, if you like that sort of thing, but that likely helps with the super-long battery life.

Logitech G613 Lightspeed Wireless Mechanical Gaming Keyboard | $55.99 ($5 off)
Five dollars isn't a massive discount for this keyboard, but this is still the lowest ever price for the Logitech G613. It's a solid wireless keyboard, as long as you don't mind the lack of RGB.
View Deal