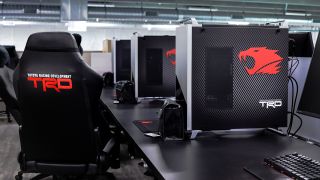 Prebuilt desktop PC manufacturer (some of whose machines appear in our best gaming PC roundup) iBuyPower is teaming up with Toyota's Racing Development team in an effort to better prepare racing drivers for real world tracks, and producing some custom PCs in the process—some of which will be available to consumers starting this summer.

iBuyPower has created a Gaming Zone inside Toyota's Performance Center in Cornelius, North Carolina, where professional NASCAR drivers will be able to hone their skills on any of 20+ custom PCs provided by the desktop builder. The machines will feature copies of iRacing, a notoriously punishing and realistic racing simulation (available on Steam) and will be outfitted with some high-end racing peripherals, all in an attempt to simulate life inside the cockpit of a stock car as closely as possible.

Prior to the partnership with iBuyPower, TRD drivers have been training their hand-eye coordination in twitch shooters like Call of Duty and Apex Legends, as well as some interesting outliers, like Rust and Rocket League. In a statement, TRD's Jack Irving stresses that "Hand-eye coordination is a skill that every racer needs to keep sharp.  When you’re going 200 mph on a track, you need to be able to make split-second decisions. iBuypower’s contribution will strengthen the reaction time of our drivers and keep them at the height of their game.”

The Intel-powered machines will feature a potent Core i9-9900K CPU and Nvidia's mighty RTX 2080 Ti GPU, and iBuyPower tells me that the consumer PCs available later this year will be similarly specced. A custom version of the company's Case Builder - Aluminum chassis sheathes the internals, emblazoned with the iBuyPower and TRD logos.