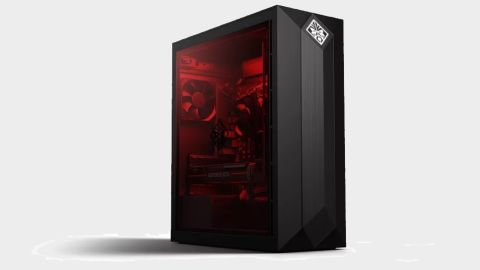 The Obelisk represents an excellent refinement of an already strong line of gaming PCs, and is priced very competitively, especially during one of its frequent sales.

HP has had an interesting trajectory as a PC manufacturer, experiencing both the dizzying heights of success (and turning out some of the best gaming PCs) as well as some fairly arid periods where falling sales and corporate restructuring threatened to pull the company under. But in its current incarnation, HP is one of the most reliable builders in the marketplace. The Omen showcases a philosophy that prioritizes what's critical in a PC build while deemphasizing some of the extravagances and frills that have muscled their way into gaming prebuilts in the last few years.

The Omen Obelisk is HP's midrange offering, nestled between their stripped down Pavilion line and the Omex X, which is clearly geared for wealthy enthusiasts and power users. The Omen's focus is definitively on performance first, eschewing grand displays of RGB lighting or an easily upgradeable open architecture to deliver a machine that's ready to manhandle modern titles right out of the box.

The Obelisk certainly isn't a console equivalent (it's much more powerful than that), but it does feel very plug and play, and designed to be accessible by more casual users. Total time from unboxing the unit to looking at the desktop wallpaper was around five minutes, including plugging it in to power and my 4K panel and a sub-30 second boot loop. Unfortunately, the idea of the Obelisk as a machine you plug in and play on extends to some of the choices HP made outfitting the interior.

Like a console, some of your upgrade options are pretty limited. While our unit came with a generous helping of 32GB of DDR4, the MOBO only packs two total DIMMs, and since it only supports up to 16GB modules, 32GB is the ceiling for memory expansion. And while this spec comes with a speedy 512GB SSD and a conventional 2TB HDD, there's only a single additional storage bay if you want to add drives. As someone with a growing collection of SSDs and HDDs to manage, I would've liked a little more room for expansion.

That said, the Obelisk is absolutely ready to play, and will handle 1440p gaming at ultra with ease. It's loaded with an RTX 2080, which means it's prepped for what Nvidia tells us is the imminent, ray tracing-fueled future of gaming, and a very capable Core i7-8700. Another indication that this isn't the sort of machine HP intends you to tinker with and upgrade is that non-K processor, but it's still a competent chip that will handle gaming applications in particular with aplomb for the foreseeable future. Even 4K is pretty manageable on the Obelisk, though you'll likely have to tweak down a handful of settings if you're looking for a silky smooth 60 FPS.

Testing the Obelisk with Shadow of the Tomb Raider's internal benchmark utility, it returned an impressive 89 FPS at 1440p and a respectable 39 FPS at 4K with everything cranked up to ultra. The numbers slipped a bit when running it through the Total War: Warhammer II meat grinder, down to 57.5 frames at 1440p and short of 30 (26.9 FPS) when I turned the resolution up to 4K . I'd hardly call those 4K results chugging, of course, so if you don't mind just a little framiness and prefer resolution to smoothness, the Obelisk can deliver 4K without tremendous sacrifice.

Of course, neither of these games takes advantage of ray tracing (as of this writing, Battlefield V continues to be the only game that properly supports DXR), and enabling it and/or DLSS will likely cost you frames, so 4K may be less viable under those conditions. That said, these games are towards the high end of demanding, so slighter titles will definitely be achievable at 4K/60.

The Core i7-8700 tucked into the Obelisk performed as we expected. Cinebench returned a score of 1385 cb in multicore performance and 186 when we tested a single core. It's an excellent choice for a gaming PC build, because while it's very handy and will deal fairly easily with most of the requirements put on it by contemporary games, it's also affordable and doesn't add a lot of dollar bloat to the final price tag.

If you're really invested in the aesthetics of your gaming PC, the Obelisk is a bit of a non-starter. While the design of the matte black elements of the case are inoffensive, with some hard angles and a logo that pulses and glows in whatever shade(s) of RGB lighting you program that evoke the machine's namesake, the tempered glass side panel is a bit of a misstep. It's not that the glass itself is poorly designed, but it does expose the unfortunate looking interior of the rig, which features some garish, static red lighting that looks gloomy and slightly ominous. It also showcases the strange offset configuration of the CPU cooler, the cockeyed angle of which makes the entire build look slightly sloppy. And aside from the relatively pleasant design of the GPU, the other components are understated at best, and very plain and functional in most cases, so bathing them in ugly ruddy light does them no favors.

That said, the interior of the case is pleasantly spacious, which helps mitigate any heat issues that may arise (the stock cooling solution packed into the Obelisk is adequate, but underwhelming) and makes mucking around inside it much easier. The contrast between the functional design of the interior and the ugly presentation is a pretty apt metaphor for the philosophy HP seems to have embraced while building it. This is a rare situation where I likely would've preferred the cheaper, flat black plastic option that's offered for the side panel on the other models instead of the more expensive tempered glass.

That said, the Omen Obelisk is an excellent machine, and with a current MSRP of $1,899 (with sale prices that dip down to the $1,499 mark) it compares very well to similarly spec'd machines that cost hundreds more, trimming out unnecessary features that you'll never miss. If you've been waiting for an excellent prebuilt to jump onboard the RTX bandwagon, and want a machine built for today, the Obelisk is a great value.

To see how the Omen Obelisk stacks up to some other excellent prebuilts, take a look at our guide to the best gaming PC you can get your hands on right now.

The Obelisk represents an excellent refinement of an already strong line of gaming PCs, and is priced very competitively, especially during one of its frequent sales.