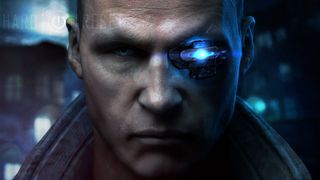 I like Hard Reset, the 2011 FPS from Flying Wild Hog, and the first two sentences of our review explains why: “Bezoar isn't a city. It's an explosion with streets.” It's a silly game, with an inexplicable dedication to an utterly incomprehensible story—I know what it's about, but I'm still not entirely sure what actually happened—and, as we said in the review, the gameplay slides into a “wash, rinse, repeat” exercise in repetition in fairly short order. But by gosh, the stuff in it blows up real good, and sometimes that's enough.

All of which leaves me happy to say that an updated version of the game, called Hard Reset Redux, is now in the works. It's being built on the latest version of the Roadhog engine (which is also being used for Shadow Warrior 2) and will include all of the content in the original Hard Reset as well as the Exile expansion. The overhauled edition will feature improved graphics, new enemy variants, and changes to pacing and balance intended to smooth out some of the spikes in difficulty that cropped up in the original release. There's also a new dash movement option, and a “cyber-katana” melee weapon.

Neither a price nor a release date was announced—“coming soon,” as the trailer says, is all we've got to go on—but the original Hard Reset, packed with the Exile expansion into the Extended Edition, is currently on sale on Steam for $3/£2, if you want to see what it's all about. Alternatively, you can snag the demo, which includes the first level and a decent selection of enemies and weapons, for the low, low price of free.