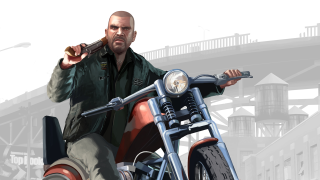 Update: Rockstar has released a statement confirming our speculation that Games for Windows Live is to blame for the removal of Grand Theft Auto 4 from Steam.

"Grand Theft Auto 4 was originally created for the Games For Windows Live platform. With Microsoft no longer supporting Games For Windows Live, it is no longer possible to generate the additional keys needed to continue selling the current version of the game," a Rockstar rep said. "We are looking at other options for distributing GTA4 for PC and will share more information as soon as we can."

GTA4 is hardly the first game to have to deal with the dead end of Games for Windows Live, but other publishers, including Capcom, Bandai Namco, Epic, WBIE (in which we describe GFWL as "a tumor," nice touch there), 2K, and Codemasters, made the transition years ago. Rockstar didn't say why GTA4's dependence on the platform has only become an issue now, but hopefully we'll see it return to Steam—with proper Steamworks support—soon.

Grand Theft Auto 4's Steam page no longer lets you buy the game, though there's no explanation why. GTA Vice City did vanish from the marketplace briefly back in 2012 due to a copyright claim over its inclusion of the song Wanna Be Startin' Something by Michael Jackson, but Rockstar have been more on the ball with licencing issues since then. As recently as 2018, GTA 4 was patched to replace several songs from Vladivostok FM in advance of their licences expiring.

Another possibility is that it's related to Games For Windows Live, which GTA 4 still requires. Each game on GFWL needs a unique key generated by Microsoft, and it's possible Valve has unexpectedly run out of them or run into an issue obtaining more. With luck, perhaps Rockstar are finally patching GFWL out of GTA 4 altogether.

There's also the chance that Rockstar are pulling GTA 4 from Steam altogether in advance of making it exclusive to their own Rockstar Launcher.

As always, anyone who has already bought GTA 4 through Steam will keep their copy and be able to download it in the future.