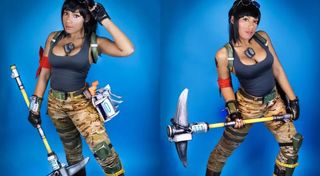 Halloween is so close we can taste it, like the questionably exposed ribcage of a banana. It's probably a bit too late to order a Halloween outfit online, but you can still get some officially licensed, moderately priced outfits at stores like Spirit Halloween. We scoured the internet and found some favorites, including the best damn Halloween decoration ever, and even some accessories for your night on the trick-or-treating town.

Reader, there are a few times in every writer's career where he feels morally compelled to go out of their way to draw your eyes to a bit of news. Today is one of those times because I found this officially licensed 17.5-foot tall inflatable Fortnite bus Halloween decoration is one of the best Fortnite toys we could find.

This big heckin' chonker is now available for $349 through Amazon. Order fast, though. This isn't exactly small enough to get Amazon's two-day shipping. We don't recommend leaping out of it but be sure to always thank your bus driver.

The best place to get Fortnite Halloween costumes

We’ve found that Spirit Halloween is arguably the best place to find the best Fortnite costumes for a variety of ages. They’ve got boy, girl, teen, and adult variants available, although things definitely trend towards kids. Amazon has a good selection of Fortnite costumes for boys and Fortnite swag to compliment your costume.  If you want an adult outfit, you might have to click over a page or two as well on the store site. We've also seen Walmart Fortnite costumes have some pretty good sales throughout October.

Here are some of our favorite looks and where to find them:


Amazon also has a pretty wide selection of pickaxes/harvesting tools for you to choose from if you want to round out your costume. Everything from the unicorn pickaxe, the Patty Whacker spatula, all the way to this monstrosity. If you really, really want to go all-out, you can buy a Boogie Grenade, an Impulse Grenade, a Port-a-Fort, or a pumpkin rocket launcher. All of them light up and make sounds. Just please don't give the cops an excuse to arrest a Daft Punk Llama.

One of the sneaky-clever things about Fortnite is that it leaves out standard character customization options. If you don't buy any of Fortnite's costumes you don't even get to choose your character's sex and will be randomly assigned one. In one match you're a short-haired lady, next you're a bearded dude and there's nothing you can do about it—except spend some V-bucks on cosmetics or a battle pass for the newest Fortnite season.

They're nice cosmetics. Fortnite's costumes are characters, some of them referencing pop culture and others just evocative looks. It's hard not to browse the store and think, "Yes, I would like to look like a goth ninja/Christmas elf/murderous pink bear/hamburger." The popularity of the best Fortnite costumes carries over into real life, where this game about dressing up (and shooting people, I suppose) has inspired cosplayers to make those outfits real and gave us some of the best Fortnite cosplay.

For a while Rust Lords like cosplayer Deacon Marshall here were everywhere. The outfit was easy enough to earn they became common as muck. But, whether because of their infamy or because enough time has passed, Rust Lords are less common these days and less contemptible too. Which is nice, because with the red jacket and closed helmet Rust Lord's an obvious reference to Star Lord, which makes it a super appropriate outfit for both dancing and failing to defeat Thanos in.

Teknique is part of the graffiti-themed Aerosol Assassins set, which is why cosplayer Nicole Winters has the paint splotches and renegade roller model pickaxe. The Tilted Towers cap is also authentic.

Raptor's description says he's a "Royale Air Force Test Pilot" but to me he looks like Beach Head from G.I. Joe if he got his washing mixed up with Airtight's. Because Airtight is yellow? Anyway, here's one of the Council of the Broz as Raptor.

You don't see enough cosplayers going for the original Fortnite: Save the World looks, but here's Amiko as the Ninja Hero subclass Dim Mak complete with sword.

United Polygon Works is a cosplayer who goes all out on the technical side of things, and for his Dark Voyager (the tier 70 reward from season 3) he worked in LEDs that really do change color—he's got cell phone banks powering them stored in his backpack and apparently they can run for six hours or so.

Ramirez, the Soldier introduced at the start of Save the World's campaign, was reborn as one of the random default skins in Fortnite. This is cosplayer Sami Bess as Ramirez, and you can tell she's the Save the World incarnation of the character because she's got a pickaxe that looks like it's been upgraded to tier 3, which is a nice bit of attention to detail.

Raven is a legendary skin that was so popular when it was released in 2018 Epic's servers stopped being able to process purchases because so many people were throwing money at them. Everybody wants to let their inner goth out, and here's Corris Cosplay doing just that.

Survival Specialist is a name that somebody at Epic was paid money to come up with, and here is Laura Lux dressed as Survival Specialist. That jar of slurp juice has the off-putting coloration down pat, so well done there.