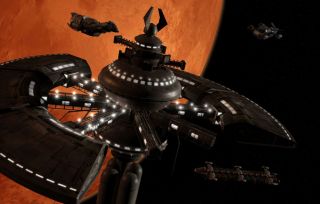 The first moving images of the Firefly game have appeared on the Firefly Online site, spotted by VG247. Original cast members are lending their voices to the project to give it a bit of authenticity, but the environments feel more Alien than Firefly at the moment.

The "Online" part of the name implies an MMO, but we won't be running round hub areas claiming quests from NPCs camping under exclams, as technical director John O’Neill sort-of explains: "the online component has to do with the fact that you’re not the only captain flying out there in the black, and you’re bound to run into other ships who have their own agendas. Some interactions will go smoothly, others might not go so shiny."

As for the specifics of those interactions, we'll have to wait and see, but you also captain an AI crew, which means managing their moods and expectations. If a crew member leaves, they return to the persistent universe, and can be hired by other players. At that point they'll retain their grudge towards you, which could manifest in missions that chase you across the galaxy. It sounds interesting, but details are thin on how that'll be executed.

Also of import: "we’ll certainly have cows in the game." Finally, the cattle transportation sim we've been waiting for. No cows to be found in the first in-game clip though.

Here are some screenshots from the official site.