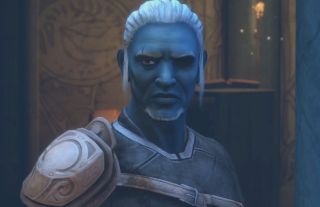 Episode two of the new Kickstarted Dreamfall series of adventure games will be here on March 10, which gives us plenty of time to mull over the events of today's teaser trailer, in which a man is punched, an arrow is caught mid-flight and clothes are forgotten in an awkward meeting between Zoe and a giant elderly frog man.

Episode two introduces a new city called Marcuria and continues the dual stories of Kian and Zoe as they puzzle their way through their respective realities, one set in a fantasy world full of men shooting arrows, and another set in a glowing cyberpunk future.

For analysis on Book One's attempt to bring back this much-loved series, check out Richard Cobbett's Critical Paths piece.