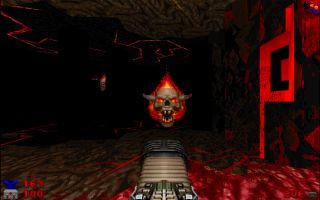 The original Doom and Doom 2 were great shooters in their own right, but what made them enduring was their support for external WADs—new levels created by fans and shared through pre-internet BBSes and commercially available CD collections. Now Bethesda has brought some of that functionality to the game, minus the hassle of dicking around with a DOS prompt, with the addition of support for "add-ons," a curated list of official Doom and Doom 2 content plus "some of the best community episodes and megawads," that will be accessible from the main menu of both games.

The first batch of add-on content will include The Plutonia Experiment and TNT: Evilution, which came together in 1996 as Final Doom, and Sigil, released last year by original Doom designer John Romero. Bethesda said that other add-ons, both professional and fan-made, will be drawn from throughout the past 25 years, and all of it will be free. For QA purposes, WAD creators will not be able to upload their own content through the system, but Bethesda said that it's "already begun tracking down members of the Doom community to discuss releasing their add-ons, and hope to release many more in the future."

Doom and Doom 2 have also been enhanced to run at 60 fps instead of 35 fps as they did originally, and have been given new qualify-of-life features including better level selection functionality and an aspect ratio option that will stretch the display vertically to match the 4:3 aspect ratio of the original releases. Some of these enhancements, like the new quicksave option and the Quick Weapon Select menu on the d-pad, are primarily for console versions of the game (you're not playing Doom 2 with a controller, are you?) but they're all available on the PC editions available through the Bethesda.net launcher as well.

The enhanced versions of Doom and Doom 2 are actually separate from the existing releases: If you already own them on Bethesda.net, they'll be added to your collection as Doom Classic (2019 Release) and Doom 2 (2019 Release), and if not, you'll get both the original DOS-based versions and the new enhanced editions if you purchase them in the future.

For the full rundown of changes in the Doom and Doom 2 updates, hit up the patch notes at bethesda.net.