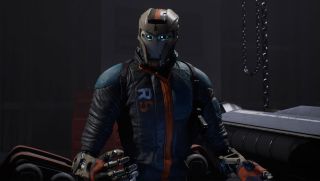 Disintegration is a sci-fi FPS being developed by V1 interactive, a studio founded a few years ago by Halo co-creator Marcus Lehto and SOCOM director Mike Gutmann. We got our first look at it last summer, although there wasn't much to see; a gameplay trailer released a couple months later revealed more about the action, which includes "grav-cycles," AI-controlled troops, and a world so messed up by climate change and war that people are transplanting their brains into robot bodies. Fun!

If that sounds like something you'd like to get your hands on, the opportunity will soon be yours. V1 announced today that two closed beta sessions will take place later this month, the first on January 28 and the second on January 29, both scheduled to run from 8 am PT/11 am ET until 11:59 pm PT/2:59 am ET the following day.

Two multiplayer modes will be available during the tests: Retrieval, in which one team attempts to deliver a payload while the other team defends against it, and Control, a battle for capture points. Both modes put a priority on the AI-controlled "ground crews," which must be protected and managed in order to claim victory. Seven of the game's crews, each with unique abilities, will be available in the beta tests, which will be focused primarily on ensuring stability and collecting player feedback ahead of the planned launch later this year.

Signups for the closed beta test sessions are open at disintegrationgame.com. V1 didn't say how many people will be given access, but the good news is that it doesn't really matter. The open beta, with the same modes and crews, will begin on January 31 and run until February 1.